You are here: Home>Locations>Barford>Miss Eleanor Archer – A Woman of Warwick 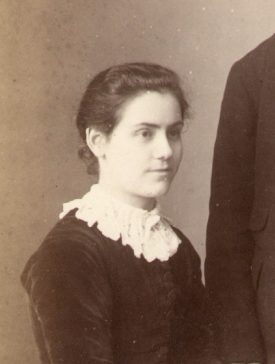 This is an account of the papers of Eleanor Archer; a local lady whose records are held at Warwickshire County Record Office, reference CR 367.

Miss Archer was born in Warton in 1861. Her father was a farm manager, her mother the school-mistress daughter of a Derbyshire vicar. Eleanor was educated at Hunningham National School and by her mother. The papers held by the Warwickshire County Record Office reflect her need to earn her living and the sort of work open to a reasonably educated woman in the 1890s-1900s. She applied for various posts: inspector of shops for the L.C.C; Superintended of the Warwick Poor Law Union Scattered Homes for children; health visitor; National Insurance Inspector.

She was an assistant overseer and collector of poor rates for Barford in 1892-1924. She acted as an enumerator in the 1901 census. She tried to earn money as a reporter of local social events and also as a story teller in the numerous journals of the day. From 1909 until her death in the 1950s she lived in Warwick at 7 Victoria Street, just down Cape Road from the record office. For at least ten years she ran a ‘High Class Registry Office’ (a servants’ employment bureau) from her home.

But this does not tell us much about the woman herself. It would appear that she was politically active. Apart from a membership card for the Liberal Party, there are friendly letters from Joseph Arch (Liberal Party MP from 1885 – 1886 and 1892 – 1900), and in 1895 she stayed in his cottage in Barford. There is a charming letter from Lady Warwick asking if she needed anything for a sick brother. As well as these personal connections, there are pieces of local political ephemera: Joseph Arch’s election addresses for the first County Council elections; numerous leaflets and election addresses.

Perhaps the most unusual part of the collection relates to the ‘Viavi Treatment’ for women. Viavi was an American patent medicine for ‘women’s problems’. Miss Archer seems to have become involved by answering an advertisement in the press. Her notebook recording the various symptoms of her clients is closed to readers for 100 years. However, a printed leaflet – ‘The Viavi Cause’ – gives a full description of the manufacture and sale of the treatment, as well as including engravings of the processes and the workers (mainly women). In contrast to this material are some of the ‘miscellaneous’ collection of women’s and children’s magazines, with titles such as The British Workwoman, The Mother’s Friend, The Home Friend.

I hope I have tempted you to have a look at the documents. There is much of interest to those interested in social history, especially the lives of women and children. There is a lot of material touching on aspects of local politics. And there is a superb collection of photographs (including some of Miss Archer herself) now readily available.

This is an edited version of an article originally published in the Friends of the Warwickshire County Record Office Newsletter, November 1990, and is reproduced with their permission.