You are here: Home>Locations>Weston-on-Avon>Letters From China: Thomas Adkins and Disillusionment 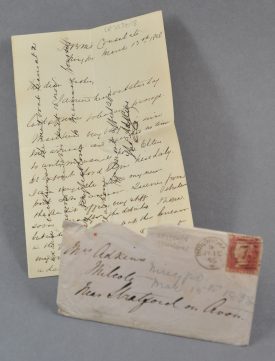 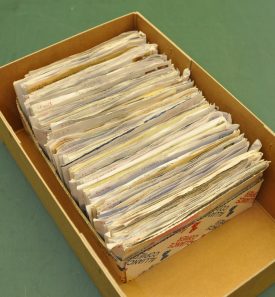 In 1855 19 year old Thomas Adkins, a native of Milcote, near Weston-on-Avon, was appointed a supernumerary interpreter at the Superintendency of British Trade with China. He was to remain with the Chinese Consular Service until 1879, rising to become a diplomat, and ultimately consul. The Record Office holds around 150 letters written by Adkins during his time in China to his parents, John Caleb and Temperance Adkins, of Milcote Hall.

The letters covering the period 1865-69 saw Adkins return to England on leave. It was the first time that Adkins, by then a man of 30, had seen his family since he had gone to China at the age of 19. The man who left England to work as an interpreter returned as a battle-hardened vice-consul who had seen active service in the Second Opium War of 1856-60 and witnessed the horrific consequences of the bloody Taiping rebellion. The first two years of Adkins’ second tour of duty of 1867-1873 saw him serving a brief stint as consul at Takow, on the island of Formosa (Taiwan), before joining the staff of the Chinese Secretariat in Peking, under the minister-plenipotentiary Sir Rutherford Alcock. Here Adkins was promoted to the dizzy heights of Acting Chinese Secretary, chiefly occupied with the tiresome business of attempting to revise the Treaty of Tientsin between the allied forces and China, originally ratified at the end of the Second Opium War.

During this second stint in Peking, Adkins grew increasingly disillusioned, reflecting on how little the British had managed to achieve in China and doubting the worth of the enormous imperial mission in the country that the western powers had embarked upon. For example, in November 1868 he wrote to his father that he ‘would not like to see [China] in the hands of Railway speculators [or]…Californians digging at her mines. Great benefits would accrue to her could she be educated to do these works for herself’.

Alongside such reflections there is deeply personal material, including an intensely sad account over successive letters of Adkins’ old friend and colleague Payne’s descent into alcoholism. Added to this are lively tales of Peking society and a fascinating letter from February 1868 detailing an astonishing journey into Formosa’s mysterious hinterland where Adkins and his travelling companion White encountered the most beautiful woman they had ever seen. We are told that ‘White who is a sensitive person quite lost his heart’.

Regular mentions of political events in Britain and internationally

The letters are of further interest for their regular mentions of political events in Britain and internationally, creating a remarkably vivid historical portrait of these years. For instance, in a letter of October 1867 Adkins refers to the plans for the Indian Army’s campaign in Abyssinia, an expedition which would end the following year in the capture of her Emperor Theodore II’s citadel of Magdala and Theodore’s suicide.

Other events discussed include the election of Gladstone’s first government in 1868, and the United States’ efforts to gain compensation from the British for aid given to the Confederate States during the American Civil War. As Adkins mentions in his letters, the ‘Alabama Claims’ (so-called because a number of Confederate commerce raiders, the most famous of these being the CSS Alabama, had been built in Britain), culminated in an attempt by the US to persuade the British to cede Canada in exchange for dropping the compensation demands. Fortunately, Adkins’ fears that the situation would result in war between Britain and the US were not realised.