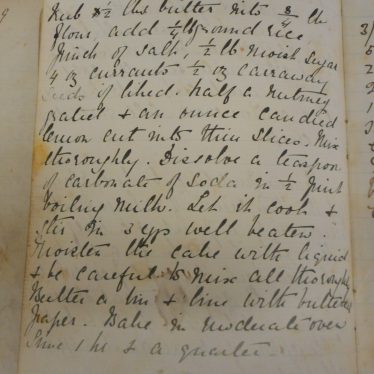 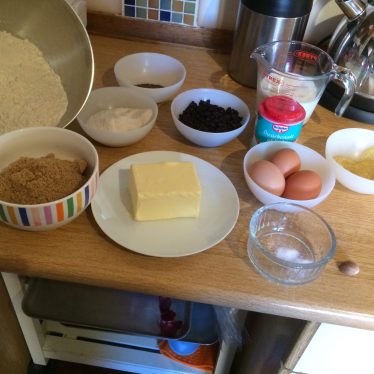 The ingredients for luncheon cake.
Image courtesy of Clare Murdoch 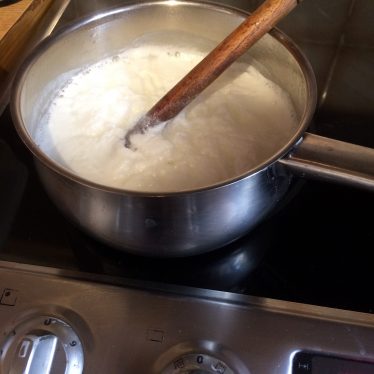 Dissolving the bicarbonate of soda in the boiling milk.
Image courtesy of Clare Murdoch 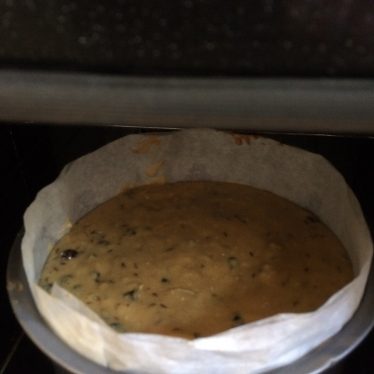 The luncheon cake is in the oven.
Image courtesy of Clare Murdoch 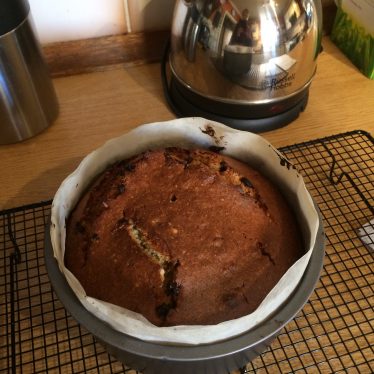 This recipe – probably dating to sometime in the 1920s – comes from a Warwickshire County Record Office document (reference CR4694/63) which is a notebook of recipes, homemade medicines, and knitting patterns from the late 19th – mid 20th century. The whole collection –  CR4694 – comes from the Tritton family of Barford and was amassed through several generations including the Devas, Sedgwick, Tritton and Verney families, covering a period from around 1820s-2000s.

A cake for lunch?

The name luncheon cake was interesting – why would you cook a cake specifically to be eaten at lunch? Also appealing was that the measures were clear and there was a likelihood that the end result should at least be edible. The Heritage Cooking Challenge has so far provided a wide variety of recipes, some less appealing than others – I name no names.

The word luncheon makes its first appearance in English in the late 1500s, in phrases like “a luncheon of bread and cheese.” Originally it meant “a thick piece, a hunk” — like a big chunk of bread loaded with cheese. By the early 19th century, luncheon had come to mean a formal version of the midday meal. Later on “lunch” came to mean an informal midday meal, as it does today, and the cake probably comes from this time.

Only three ingredients presented any difficulty, firstly the ground rice. A quick look online showed that while rice flour is still available. Ground rice was more likely to be a coarser version, so I opted to grind my own. The second slight unknown is the “moist sugar”, and I chose an unrefined light muscovado. Lastly the candied lemon; candied peel is widely available but this contains a mix of peels, so in order to stay true to the recipe I made my own candied lemon peel. The bicarbonate of soda used as a raising agent is an alkali and needs an acid, as well as moisture, to activate it; hence the addition of milk. I also opted to add the full amount of the “optional” caraway seed. The method is easy to follow and the cake was soon in the oven.

Having let the cake cool, I of course tasted it (this is perhaps against the spirit of the Heritage Challenge but I’ve never been patient) and found that I disliked the strong flavour of caraway. So the following evening I set to and made a second cake, without the optional dreaded caraway seed. I had used all the candied lemon peel so just used ordinary candied peel, which seemed to make no difference in taste. Everything else was the same. This second cake I found much more palatable.

Both cakes were eaten by staff and volunteers and views were split; those with a taste for caraway preferred the cake that contained it whereas others, like myself, found the caraway seed taste unpleasant and preferred the one without. Someone suggested a slice of cheese would be a good addition and I certainly think a little butter spread on the slices was an improvement. Nearly all of both cakes were eaten, though this is probably more to do with record office staff’s ability to eat just about anything that has the word cake attached to it.

Rub 1/2lb butter into 3/4lb of flour, add 1/4lb ground rice, pinch of salt, 1/2lb moist sugar, 4oz currants, 1/2oz caraway seeds if liked, half a nutmeg grated and an ounce of candied lemon cut into thin slices. Mix thoroughly. Dissolve a teaspoon of carbonate of soda in ½ pint of boiling milk. Let it cool and stir in 3 eggs well beaten. Moisten the cake with liquid and be careful to mix all thoroughly. Butter a tin and line with buttered paper. Bake in a moderate oven. Leave 1hr and a quarter.