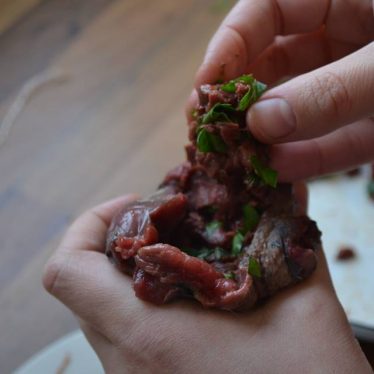 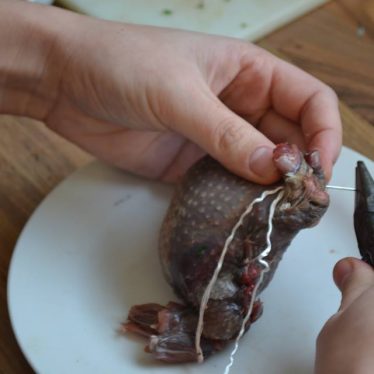 I consider myself an amateur historical-seamstress, but this is taking it a bit far!
Image courtesy of Beck Hemsley 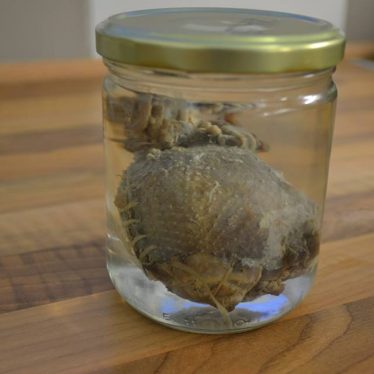 Out of the pot, into the pickle...
Image courtesy of Beck Hemsley 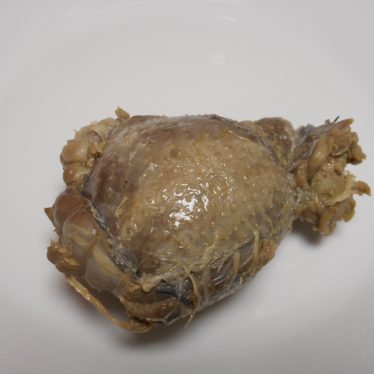 Fresh from the jar
Image courtesy of Beck Hemsley 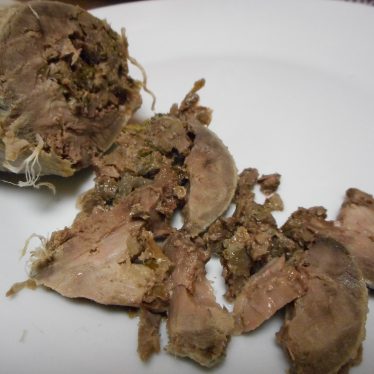 As we sliced it, the stuffing began to crumble...
Image courtesy of Beck Hemsley 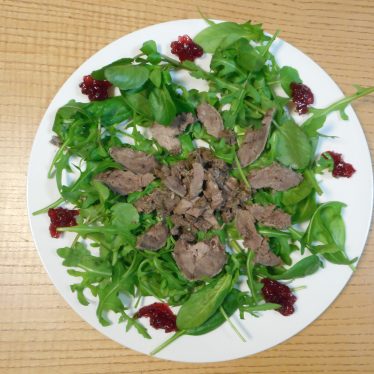 It’s what you’ve all been waiting for! The results of the pickled-pigeon extravaganza, for your delectation and delight. I was challenged by my colleagues to attempt one of the grimmer-sounding recipes in Mary Wise’s 18th century cookbook. Having translated the recipe to modern English, my partner and I set about it with gusto.

Warning: this description may contain pigeon gore. Do not continue reading if not prepared!

The first challenge: debone a pigeon

After I overcame the initial shock of the still-bloody cavity, the leftover stubby feathers and the undigested food in the crop (look it up, it’s gross), it was time to de-bone the pigeon. As the recipe does not call for any sewing-up (other than at the two ends), I suspect they wanted me to de-bone it without actually cutting the skin. I hear it is possible – it creates a tube, kind of like de-gloving (don’t look that up, it’s even grosser). However this was too ambitious for me so I used a very sharp knife, began by cutting either side of the breastbone, and then worked my way round each side.

The result was something from a horror movie, but I figured with a bit of stitching (Frankenstein-style) we could create a reasonable parcel.

The next stage was actually quite pleasant. We shredded the meat from a second pigeon and added a selection of herbs and spices. It began to actually look nice! We fried up a small bit to test the flavours, and found it to be well balanced – a rich, round, herby flavour. This was stuffed into my pigeon-parcel and then I sewed it closed.

By now, it was beginning to resemble some kind of bodily organ – a theme which continued throughout the process. We gently boiled this in a pan for about an hour, and checked the temperature to make sure it was cooked through. It had now gone a sickly grey colour and bits started flaking off. We left it to cool for 15 minutes or so, while we sterilised our jam jar.

As I mentioned in my previous post I was a bit terrified of giving everyone botulism, so we used a modern pickling vinegar. It was a simple matter of popping the pigeon-parcel into the jar of vinegar, making sure it was totally covered, then screwing on the lid. The vinegar was initially quite clear, but began to yellow and cloud up the longer we left it. It looked for all the world like a science-lab specimen.

How long to leave it?

In theory, the pickling process takes a few days and then you can keep the pigeon preserved for a decent stretch of time. However, the sight of the monstrosity at the back of the fridge was giving the staff nightmares, so we ate it after a week.

It wasn’t too appealing as it emerged from the jar. It was quite firm, and as we sliced it the shredded stuffing crumbled out. But you eat with your eyes, and with some help we managed to get it tarted up! I have to say, I don’t think it looked too bad.

I’ll let other people comment their individual opinions, but the overall feeling was that it was very vinegar-y but otherwise a pleasant surprise. I suspect we should have rinsed the vinegar off before serving, and that the original recipe for the pickle would have had a nicer flavour. However there were definitely some rich, pleasant flavours coming through beneath the vinegar. The stuffing was the best part, having been further from the pickle and enlivened with herbs and spices.

Overall, I’d call that a success!