You are here: Home>Locations>Newbold Pacey>The Election of 1774 in the County of Warwick

The Election of 1774 in the County of Warwick 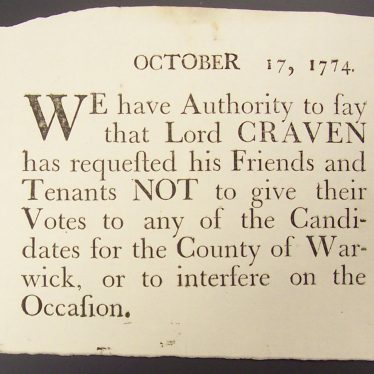 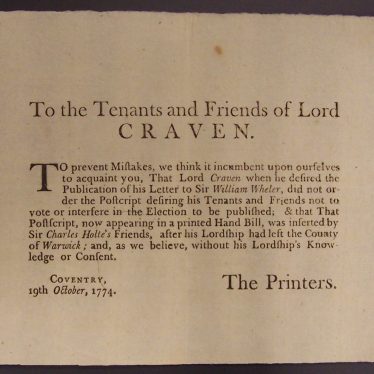 ...or does he? Claims are refuted.
Warwickshire County Record Office reference CR2963/2/4 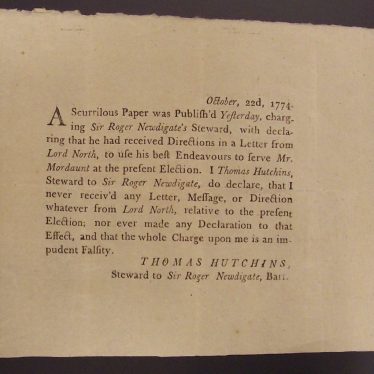 With an election on the horizon, it might be nice to look at a past parliamentary election from a cultural historical perspective. Here, we look at the 1774 election for the county of Warwick (a rare contest among a series of elections where the candidates were returned unopposed) from the perspective of the media used to conduct the election campaign.

In terms of the campaigns, and the words used in an attempt to persuade voters of their cause, of particular note is that Sir Charles Holte’s supporters, according to the handbills in this collection at least, appear to have been involved in some contentious issues. Claims are made on behalf of others, presumably in an attempt to influence the election result1.

What is significant is how these claims are made, on printed handbills. The media form is particularly interesting, as we see print establishing itself as a cultural authority. Much has been made as to how print culture fixes and stabilises the words, it makes the text more ‘reliable’ in the eyes of the reader than scribal culture2. Print, then, is taken more as ‘fact’ and gives authority to the writer – we see this in the handbills, where statements are made on behalf of Earl Craven, asking people not to vote in the election, and it is written that Roger Newdigate’s Steward is canvassing on behalf of Mordaunt.

Both these claims are denied by the parties concerned. The fact that the claims are required to be denied shows the cultural weight that the words carry now that they are in print – there is a very real fear that the claims made in the handbills will be believed and acted upon. The only way the claims can be countered, meanwhile, is if those defending the position use the same media.

Print, then, offers a sense of permanence and longevity. The lengthy vote, taking place across a week, also shows a rather different pace to elections today. There are however similarities that can be drawn from the handbills, and a sense of immediacy is conveyed by the handbills themselves. In contrast to books, handbills are more ephemeral. Much as with newspapers, the quality of paper is inferior, and the media is intended to be consumed and disposed of immediately. Becoming a popular media form3 not long before the time of this election, that these bills survive today is, therefore, surprising in a way, but also enables us to gain an insight into historical elections and the processes involved. A cheaper form of distributing printed information, handbills nonetheless offer a cultural value that lives beyond their intended use.

Thomas George Skipwith – of Newbold Pacey Hall, related to the Craven family and by marriage to the Shirley family. First elected as MP for Warwickshire in 1769 after the death of William Bromley, he resigned the seat in 1780 before spending four years as an MP in the rotten borough of Steyning.

John Mordaunt – son of Sir Charles Mordaunt, who had been MP for Warwickshire for the previous 40 years. Defeated in this election, he had to wait until 1793 to enter Parliament for Warwickshire, when he was returned unopposed. He held the seat until 1802.

Sir Charles Holte – representing the Birmingham interests, he suffered from ill health after the election, and is noted for poor attendance during his spell in the Commons. He resigned the seat in 1780.

1 This could, of course, be symptomatic of the increasing influence of Birmingham against the rest of the county. For setting this in context, see: http://www.historyofparliamentonline.org/volume/1754-1790/constituencies/warwickshire

2 This can sometimes be overstated, and it’s impossible to do full justice to the arguments in so few words. For a review of the debates surrounding print culture and how it fixes words in a moment see, among others, Murphy 2000, Anderson 1991, Hadfield 2000, McKitterick 2003, and Eisenstein 1979.

3 Albeit aimed at the subsection of the population that was literate, often those who were entitled to vote.

This article is May’s Document of the Month for the Warwickshire County Record Office. Further articles can be found on their website.