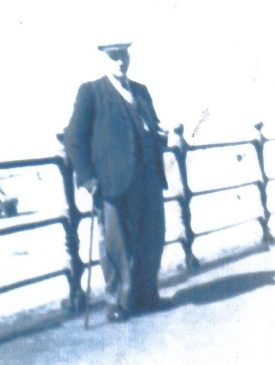 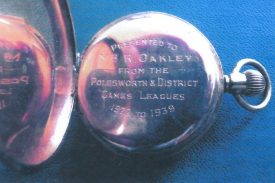 A gold pocket watch. This was presented by the Polesworth and District Games League, to the first steward of Birchmoor Working Mens Club, Robert Oakley, around 1922-1939.
Image courtesy of Iris Painter

Birchmoor Working Mens Club (WMC) is one of the Premier social clubs in the Tamworth area. The club was formed in June 1910, by miners from Birchmoor Colliery, who played football on the pitch which is still in use today. It was decided to form a committee and the first club secretary was Mr Deakin. The committee bought the premises where the club is now situated, in October 1910.

The building was built in approximately 1876. It was originally a baker’s, and then became a butcher’s shop until Birchmoor WMC purchased the property. The club ran into financial difficulties in the 1950s and was taken over by CISWO (Coal Industry Social Welfare Organisation) until members again regained possession in the 1960s. In April 2011 Birchmoor WMC celebrated 100 of C.I.U. (Club and Institute Union) Affiliation.

The Working Men’s Club and Institute Union is the largest non profit making social entertainment and leisure organisation in the UK, representing the interests of over six million club members.

The Working Men’s Club and Institute has come a long way since 1862. However, a lot of working men’s clubs have suffered from an old fashioned image among young people, and some have found it very hard to compete with modern trends. This has resulted in many closures in recent years. Coventry Working Mens Club first opened its door in 1862 but sadly is no longer in business, a sad reflection of the trend in closures across the country which currently sees four clubs a week closing. Birchmoor WMC has adapted over the years, catering for all generations. Although never complacent, it is currently bucking the trend.

Birchmoor Colliery which was also known as “Cockspur Colliery”, was open from 1860 until 1927. A tramway was used to transport coal from the site to the canal, for nationwide distribution by barge. The tramway ran over land to Tamworth Road where the wharf, known as “Polesworth Basin”, was located. Pooley Hall Colliery was also linked to this line, Pooley Hall Colliery was still working up until 1965 having begun life in 1897. Several other mines were located in the area, including Birch Coppice and Hall End being two major sites – both pits started around 1875. These mines were in operation for over a hundred years, finally closing around 1987. Although 28 years prior to the foundation of Birchmoor WMC, Roger Evans portrayal of ‘The 1882 Baddesley Colliery Disaster’ (where 32 local miners lost their lives), gives us a graphic insight into what being a miner around 1910 would have been like. The local area has been associated with both mining and brickmaking and probably goes back earlier than Alvecote Priory 1159.

William Gilliver was renowned throughout the world for breeding fighting cocks and his association with the “Gamecock Inn” landlord, ensured the village of Birchmoor would be eternally famous and linked to the ‘Sport of Kings’, as a Birchmoor tale relates.