You are here: Home>Locations>Coventry>Triumph, Canley. Another 70s View 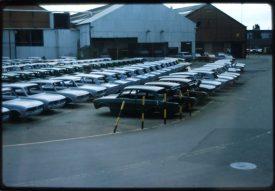 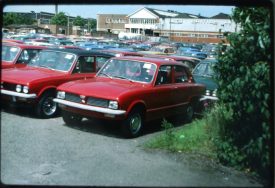 When I first went there I went from GEC, and I arrived there in my Volkswagen Beetle, and the security man wouldn’t let me take it in there! He said ‘you can’t come in there with a foreign car’ so I had to park outside the gates. So a month or two later I changed my Beetle for a Triumph Vitesse, so I could go and park somewhere!

A huge number of TR6s

When I was there I remember there being a huge number of cars round the factory, it was TR6s mostly. There’d been some sort of slowdown in the States, that’s where TR6s used to go and they’d not been selling well – there was miles and miles, as far as you could see! When I was there I heard a story of a chap who drove a TR6 off the end of the production line to the parking area, and of course it was done at top speed wherever you went. And when he got to the parking area he discovered they hadn’t put the brake fluid in, so he ploughed into about a dozen brand new TR6s. I was only there for about nine months in 1973, before I went back to GEC.

It was like a small town really wasn’t it, it was a huge site. I used to be able to claim travel expenses for travel around the site, it was a three mile round trip to see someone at the opposite end! You could buy anything you wanted there too, even meat – that came from a bloke who worked at the Kremlin – the head office block was known as the Kremlin! All the big factories were the same, though.

Please follow the link for more memories of Triumph.