You are here: Home>Locations>Knowle>Knowle and HMS Black Prince

A friendship that spanned a sea 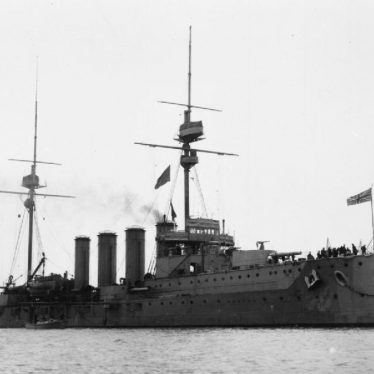 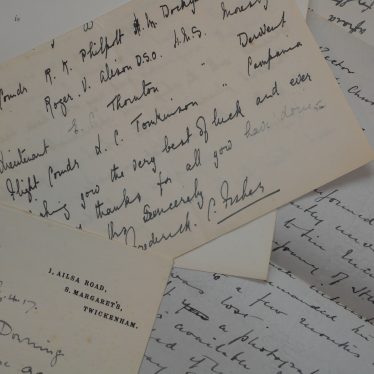 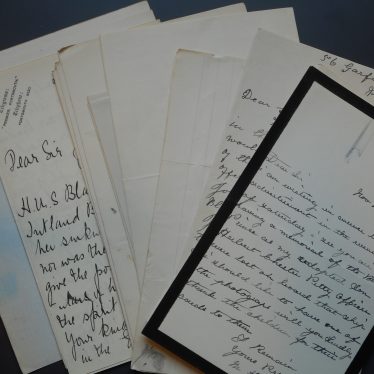 Other letters from bereaved families asking for a photograph of the memorial.
Warwickshire County Record Office reference DRB56/52/1-2. 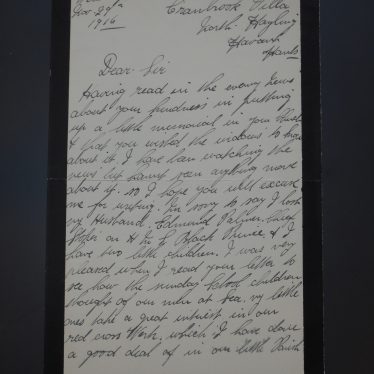 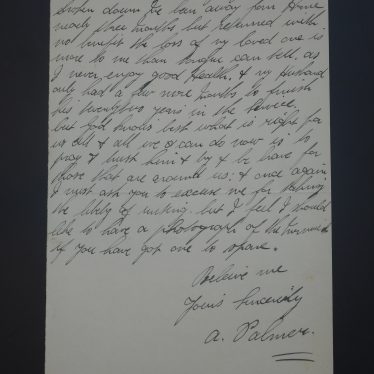 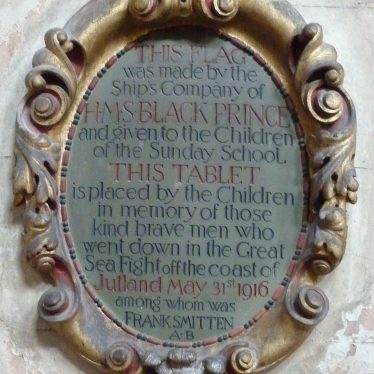 The First World War created some extraordinary friendships – we have all heard of the Christmas Truce, when soldiers put down their weapons to play football together. Here is one that started out closer to home.1 This is a letter from the correspondence of Reverend Thomas Downing, vicar of Knowle parish church from 1901-1932.

The author is a widow, Mrs A. Palmer, whose husband had recently been killed in the Battle of Jutland.2 He was aboard the HMS Black Prince, an armoured cruiser in the British Fleet. This letter, and others in this collection, give evidence of Downing’s patriotism, and his remarkable friendship with that ship and its company.

Reverend Downing himself was an active member of his local community in Knowle and took a personal interest in the effects of the First World War on his parish. This is exemplified by his scrapbook ‘Knowle Men’, which bears the details of all those local men who served in the war, and what became of them.

Downing’s first action of reaching out to the HMS Black Prince was in 1915, when he encouraged the children at his Sunday School to send the ship’s company Christmas cards. The crew were delighted with them and one of them, Ernest Townsend, sent his back to his mother for safekeeping.

The ship’s crew decided to send the children in Knowle something in return. In the end, they decided on a photograph of the ship, cap ribbons (‘one for every child’) and a silk ensign made by the crew. However on the day that the ensign was delivered to Downing in Knowle, tragedy struck. The HMS Black Prince was sunk whilst taking part in the Battle of Jutland. No-one on board survived.

But this was not the end of the friendship between ship and parish. Just a few weeks after the tragedy, Downing decided that he would erect a memorial tablet commemorating the ship’s company. Nor did he forget those who had lost loved ones, as the letter here proves.

Mrs Palmer, like many others, had seen a letter Downing had sent to the Portsmouth Evening Times. In it, he mentions the memorial tablet and ‘that perhaps the widows of the men might, some of them, like to know about it and have a photograph’. Mrs Palmer’s letter is just one of over 60 in the collection accepting this offer of a picture.

‘More than tongue can tell’

Many families lost fathers and sons that day, but this letter in particular highlights the sharpness of their loss, and the desolation that many families must have felt at the time. Many of the other letters are very brief and simply ask for a photograph of the memorial. Mrs Palmer, however, goes into detail about her own personal circumstances. The loss of her husband means more to her ‘than tongue can tell’. It seems especially hard for her, as she explains she has ‘two little children’ and her own health has ‘broken down’ in spite of trying to recuperate away from home. The fact that her husband only had ‘a few more months left to complete his twenty-two years’ service’ is particularly tragic.

However it is clear, from this letter and others, how much Downing’s gesture meant for the families of those who had died in HMS Black Prince. The tablet can still be seen today in Knowle parish church, not only as a memorial to those men who died a hundred years ago, but also as a reminder of one man’s determination to remember them.