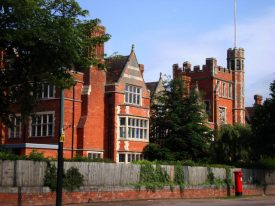 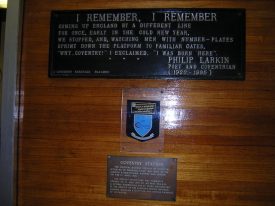 The writer Philip Larkin was born in Coventry on 9th August 1922. He began writing at an early age, and after studying English at Oxford, he became a librarian at Wellington Library, Shropshire. Larkin worked at libraries in Leicester and Belfast before his appointment as University Librarian for Hull University in 1955. Although he became well-known for his published work, he never committed to it full-time, and would remain a librarian until his death in 1985.

Larkin grew up in the Radford district (in a house now demolished to make space for the ring road) and was the son of the Coventry city treasurer, Sydney Larkin. From the age of eight he attended King Henry VIII School on Warwick Road, and made regular contributions to the school magazine, The Coventrian, which, between 1939 and 1940, he also helped to edit. He was accepted into St. John’s College, Oxford to study English in 1940, and after this, would hardly visit Coventry again.

There is plaque hung at Coventry Railway Station commemorating Larkin, with lines from his poem ‘I Remember, I Remember’. In the poem the narrator is on a train which unexpectedly stops in the city, and he exclaims, ‘I was born here’. It is telling that these are the lines that were chosen, however, and not these lines from the end of the poem, which give a more negative and uncomfortable perception of Coventry:

‘You look as though you wished the place in Hell,’
My friend said, ‘judging from your face.’ ‘Oh well,
I suppose it’s not the place’s fault,’ I said.

It is sometimes overlooked that Larkin was born in Coventry, as he was adopted by the city in which he spent most of his life – Hull. There is an awkward rivalry between the two cities, both of whom attempt to take ownership of the poet in their Larkin trails, dedicated to various places that were known or frequented by him.1 There has even been recent controversy about Larkin regarding Coventry’s bid for City of Culture 2021. Arguments abound as to whether celebrating Larkin’s connection with the city in order to gain the title is appropriate, since some of Larkin’s personal views, having come to light in recent years, are seen by some as objectionable.

Despite this, Larkin’s work is still beloved by many. He is widely seen as one of the most talented poets of the 20th century, and was named Britain’s greatest post-war writer by the Times in 2008. So, whether claimed by his native Coventry, or his adopted city of Hull, Larkin’s work, at least, is greater than boundaries.