You are here: Home>Locations>Knowle>Knowle in the First World War

Knowle in the First World War 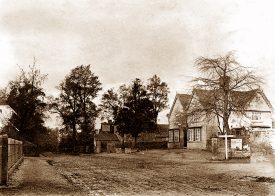 The Wilson Arms and edge of the Lodge in 1914, as it appeared at the outbreak of the First World War.
Photo courtesy of the Knowle Local History Society 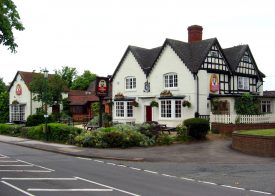 The Wilson Arms as it is today.
Photo by G.C. Dean, and reproduced courtesy of Knowle Local History Society

Knowle at the outbreak of the First World War was a typical small village in Warwickshire with good road communications, where agriculture and allied trades provided work for a large part of the local population. The community, like countless others, provided recruits for the armed forces and supported other services such as the collection of animals for use in military operations.

The need for transport animals in the British Army

In 1914 there were some 25,000 horses and mules in the British Army. They rose to a maximum of 809,248 by 1918 (they needed 5,438,602 tons of oats and hay during the war – more than the total tonnage of ammunition). The vast majority of horses required were used for transporting ammunition, food and other supplies to support front-line troops. It is estimated that eight million horses and other equines died in the war across all participating nations. Many died from exposure, disease and exhaustion as well as falling prey to enemy action. The shortfall was made up by requisitioning privately owned animals, of which Knowle provided a share. Prior to the Great War the Government paid a retainer to doctors, farmers, tradesmen and anyone else who owned horses to call upon in times of need. Only the good horses were commandeered; the owners were left to replace them with inferior ones. Owners were paid £40 for a troop horse and £60 for an officer’s charger – substantial sums in the early 20th century.

The Remount Centre at the Wilson Arms

In 1914 the Remount Department charged with collecting horses and dispatching them on to combat areas made its headquarters at the Wilson Arms in Knowle. Mrs. Tansley, the landlord’s wife, was commanded to feed and sleep the 21 officers and men who were fetching in the horses. For this she was paid 2s 9d (14p) per man per day. Mrs Tansleys daughter, Mrs Nellie Court commented:

“We had to take the blankets and eiderdowns of our own beds to make enough (bedding) for them, but they were a lovely lot of young men, most of whom were killed.”

The call-up of the local horses caused much unhappiness. The Whitehouse family hoped their pony would not be taken. Charles Lander of Tilehouse Green Farm was heartbroken to lose the horse he used to deliver milk. To avoid a similar tragedy Mr Mullard took evasive action. Mr Mullard’s daughter, Mrs Ivy Silver, explained what he did:

“My father used horses for butcher’s deliveries, he was determined to save his best horse which he treasured, and on the day of the round- up he took it off and drove for miles round the countryside, to keep it out of the way until the operation was over.”

Once hostilities ceased it soon became apparent that the horse population would need to be reduced. Many were slaughtered to be used as a food source for German prisoners and local populations in France and Belgium, others were sold to farming communities and some were sent back to the United Kingdom. Horses which were returned after the War were auctioned. One local resident had a surprise. Mr. Court’s chestnut mare, Dolly, went to Flanders with the Warwickshire Yeomanry. Incredibly, after being injured and sent home, she was auctioned by the army at Warwick and answered to her own name when Mr Court spotted her in a field at Darley Mill.

If you would like to know more about Knowle in the Great War, Knowle Local History Society have produced a booklet ‘The Great War in Knowle 1914 -1918’ which captures the impact of the War on life in Knowle. Further details about obtaining copies can be found on their website.

Linkedin
More from Knowle
More from World War One