You are here: Home>Locations>Warwick>The Austin-Healey Sprite is 60

The Austin-Healey Sprite is 60 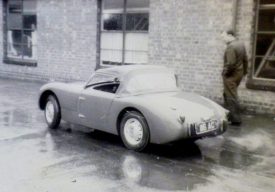 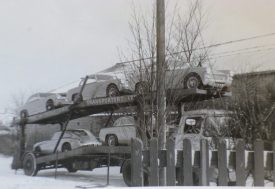 The Austin-Healey Sprite was announced to the press in Monte Carlo by the British Motor Corporation (BMC) on 20 May 1958, just before that year’s Monaco Grand Prix. It was intended to be a low-cost model that “a chap could keep in his bike shed”, yet be the  successor to the sporting versions of the pre-war Austin Seven, such as the Nippy, Ulster and the Gordon England Brooklands specials.

The Sprite was designed by Gerry Coker, the Donald Healey Motor Company’s stylist1. Gerry left Healey’s employ to join Ford in the USA in 1957, before the launch of the Sprite.

The car that Gerry had designed had a longer nose with slant back grill and with ‘pop up’ headlights. When he first saw a production car in a US Austin dealer’s showroom he thought Donald and his team had taken leave of their senses after he (Gerry) had left the Warwick based company. He thought that it resembled a headlamp test mule rather than a real motor car. But sometimes ‘quirky’ captures the imagination and endears itself to customers. So it was with the Mark I AH Sprite. And it’s a fondness that has grown with age, it is a car that is loved now even more than when it was being produced.

Healey received royalty payments from the British Motor Corporation (BMC) for each AH 100 and AH Sprite sold. The retail price of the Sprite when it first went on sale in the UK was £669. BMC’s ability to sell the Sprite at such an attractive price, for a sports car, was a result of the car using many components from the corporate parts bin. These savings allowed money to be spent on improving the power output of the A series engine.

Healey did not build the car at their Cape Works in Warwick. The Sprite was made at the MG factory in Abingdon and it was inevitable that the success of the design would spawn an MG version known as the Midget, reviving a popular pre-war model name for that marque. The Midget Mk I was introduced when the Sprite Mk II was launched in June 1961. The body styling for both cars came from the BMC corporate pen; its lines aped those of  the Midget’s big brother the MGB. It was certainly more conventional than the Mk I Sprite, with normal headlamps and a boot with a separate lid. But above all it was still a low cost sports car aimed at young men and women around the world, but especially the US. Enthusiasts often refer to Sprites and Midgets collectively as “Spridgets”.

The Austin-Healey Sprite and MG Midget provided entry to sports car ownership for thousands of enthusiasts and indeed many can be seen across the county it was ‘born’ in to this day. But that wasn’t confined to road use, these cars were ideal for entering into budget level motor racing. Then, if you got the ‘bug’ the design lent itself to development and tuning and soon you found that you were competing successfully with much larger cars. The ‘Spridget’ also spawned a small industry in its own right; that of making replacement bonnets (hoods), hard-tops and complete ‘fastback’ bodies. Many of the latter were and are a delight to behold in my opinion.

In 1971 British Leyland, the successor to BMC, cut its links with Donald Healey and just over one thousand Sprites were badged Austin Sprites, not Austin-Healey Sprites. The Sprite’s sibling, the MG Midget, continued in production until 1979.

1 Gerry had also created the design for the Healey 100 in 1952. It was this car that had brought Austin and Healey together.

This is a mildly abridged and altered version of an article that appeared on the Warwick Healey Archive Bulletin, and is reproduced with the author’s permission.