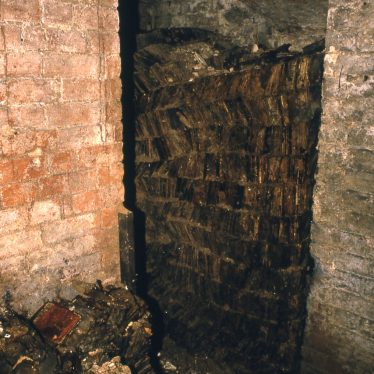 The cellar in which the collection was found, packed with negatives in a less than mint condition!
Picture courtesy of the Warwickshire County Record Office, collection reference CR 2555 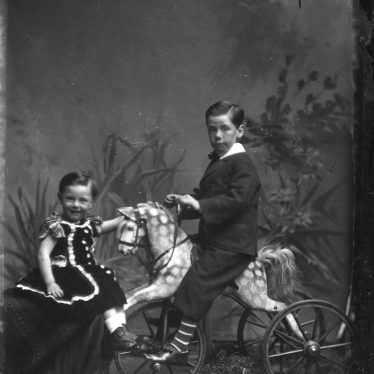 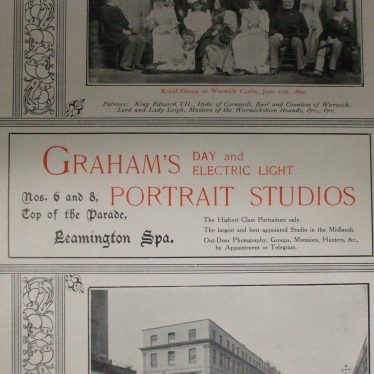 In April 1987, builders were working on 16 Augusta Place and broke through a bricked up wall to a cellar. It was highly unlikely that they expected to find what they did.

Behind the wall were thousands upon thousands of glass plate negatives. This was no exaggeration either, there were anywhere between 40,000 and 50,000. The owner of the building contacted local historian Bill Gibbons, who in turn got hold of the staff at the Warwickshire County Record Office. They spent a week clearing out the cellar and this was no small task, given that the negatives were stacked up to five feet high!

Mark Booth, archivist at the time, said the photos could be acknowledged as Graham Studios pictures, as many of the props were the same as those used on previously identified Graham photos.

One of the largest surviving collections

It was claimed that this was one of the largest surviving collections from a 19th century photographer, although how they had ended up there nobody knew. Unfortunately, many of the negatives were unable to be saved as they were too badly damaged by the damp conditions in which they had been living. Nonetheless, over 5,000 of the negatives were able to be rescued and have been preserved at the Record Office, under catalogue number CR 2555.

Robert Graham opened a studio at 7A Upper Parade Leamington in 1873, later moving to York Terrace and ending up at no. 6 Parade, expanding into the next door premises as he became more successful. The business continued until about 1925. Their brochure of c. 1902 (CR734/20) boasts of their three Portrait Studios, one equipped with electric light. Much is made of the luxury of the surroundings, and the general high class standard of the studios – it is clear, however, that the passing of time (and also of course the advancement of photographic technology) makes what was considered a ‘natural expression’ then, and what would be now, is somewhat different!

For further information on Graham and other Warwickshire photographers, see Warwickshire Photographers 1843-1940 by R.J. Chamberlaine-Brothers, held at the Record Office library, under the number C.779.CHA.

Linkedin
More from Leamington Spa
More from Photographers and Artists