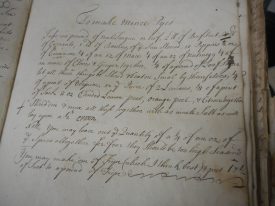 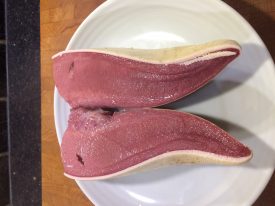 The tongue boiled and ready for mincing.
Image courtesy of Sharon Forman 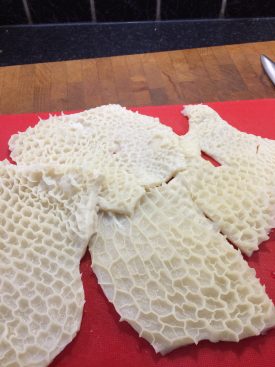 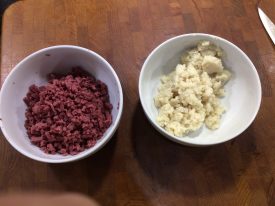 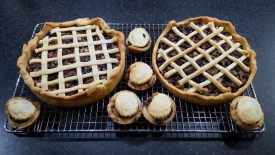 It isn’t Christmas without a mince pie and once upon a time it wouldn’t have been a mince pie without the addition of actual minced meat. When the Warwickshire County Record Office collection boasts a wonderful recipe for mince pyes *with beef tongue*, how could we resist a Christmas Heritage Cooking Challenge?

This recipe dates from the 18th century and comes from a book of family papers and recipes belonging to the Wise family, (predating the more famous Mary Wise recipe book), and is unusual in recommending an alternative to the tongue. The author reassures us that *tripe* is best for mince pies, so we considered it remiss not to test that assertion.

In previous challenges, some have found sourcing the ingredients for these old recipes difficult, but assembling the components of these mince pies was relatively straightforward. The tongue had to be ordered in advance from our excellent local butcher who could not supply the tripe, so this was obtained from another butcher. Check out the marvellously named Tripe Adviser from the Tripe Marketing Board for a guide to suppliers of tripe in Warwickshire.

There were also some substitutions to make for ingredients that are no longer available including sack wine (medium dry oloroso sherry works well) and verjuice (we used a mix of grape and lemon juice), while we had to omit the candied citron peel altogether, using extra candied orange peel to make up for it. Citrons are still eaten in some parts of the world, but unfortunately not the Midlands.

Aside from difficult ingredients, one of the reasons we call this a cooking ‘challenge’ is that the recipes often assume a huge amount of food knowledge, much of which is lost, even to the keenest of cooks, in the modern kitchen. Our recipe calls for the inclusion of neat’s tongue (strictly a calf’s tongue, but we used ox), chopped small, but does not specify whether this should be pre-boiled and skinned. We plumped for pre-cooking and set the tongue to boil gently for two hours. After that time we were able to peel and dice the meat easily.

Similarly, the recipe encourages the use of tripe. With no guidance at all, we bought a honeycomb variety and boiled this for an hour. After that time the tripe is meltingly soft and takes on the flavours of anything it is cooked with. We began to see the wisdom of including it.

No need to hold your nose

Once all the ingredients were mixed together, the smell of the sherry and spices was unmistakeably mince pie. We were surprised at just how similar the 300 year old recipe was to the treats we know today, so with added confidence we made a very plain shortcrust pastry to house the mixture and in the absence of any form of instruction, made shallow, deep-filled, and lattice pies for good measure.

While the tiny pieces of tongue were still visible in the mince pie mix, most people didn’t notice it. Meanwhile, the tripe seemed to melt completely into the mixture. It was fascinating to hear that almost all who tasted them preferred the tripe variety to the tongue as the spices seemed more pronounced and the flavours deeper than in the other variety. It seems the recipe author was right and tripe was best!