You are here: Home>Locations>Warwick>A Jurassic Excursion to Shire Hall, Warwick 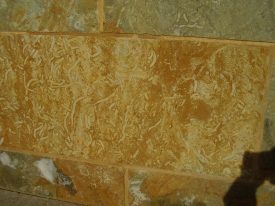 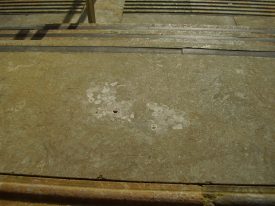 A few years ago, new steps and a disabled-access ramp were installed at Shire Hall, Warwick. The chosen medium for construction was a local building stone known as Hornton Stone, which has been quarried at Edge Hill in southern Warwickshire, as well as in adjacent parts of northern Oxfordshire.

Hornton Stone is a type of ironstone, well-known for its various green and red-brown shades, and its properties that allow it to be intricately carved and sculpted. It originated as iron-rich sand on a shallow sea-floor, 190 million years ago during the Jurassic Period.

A taste of Jurassic sea-life… in Shire Hall!

Hornton Stone commonly contains plenty of fossils and fossilised worm burrows, and the new stonework at Shire Hall is a great place to get a taste of Jurassic sea-life. In particular, look out for spaghetti-like structures in the rock representing ancient sea-floor burrows, and clumps of nut-shaped fossil shells known as brachiopods.