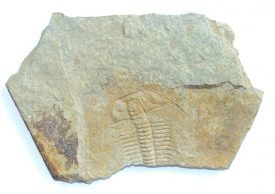 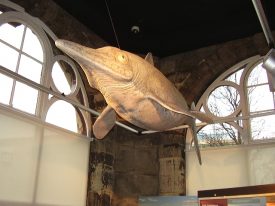 John Roberts has already told us about the intriguing occurrences of maritime/salt-loving plants in parts of our landlocked county. Interestingly, this same landscape preserves geological evidence (rocks and fossils) for long-lost seas in the distant past.

The giant quarries of the Nuneaton ridge

Firstly, the giant quarries of the Nuneaton ridge expose layers of hard sandstone, limestone and shale that formed as layers of sediment in a sea that occupied parts of southern Britain over half a billion years ago. Later earth movements have tilted these rock layers at high angles – ancient sea-beds preserved high and dry on land. Life in our planet’s seas was quite primitive at this time. The rock layers at Nuneaton have yielded some of the oldest fossilised shellfish in the world – tiny shelly tubes about the thickness of a pencil-lead. They also yield trilobites – fossils of sea-dwelling arthropods that look a little bit like woodlice. During the Cambrian Period, roughly 500 million years ago, trilobites were pretty much the most advanced life in our planet’s seas.

The second major marine episode in Warwickshire’s long history was during the Jurassic Period, between about 200 and 170 million years ago. A warm shallow sea spread over large areas of what is now southern Britain, depositing layers of mud, silt and sand. Today, these layers of sediment are preserved as the sedimentary rock layers that form the landscape of much of southern and eastern Warwickshire. These have been revealed by quarrying (for example the cement quarries of Rugby and Long Itchington) and the ironstone quarries of Edge Hill.

These rock layers contain a lot of fossils which help us to build a picture of Jurassic marine ecology and biodiversity. At the top of the food chain were the marine reptiles known as ichthyosaurs and plesiosaurs. These fed on fish and shellfish and other invertebrates. Down toward the bottom of the food chains were microscopic plankton including simple plants and single-celled animals. These all contributed to the sediment, now preserved as bedrock in the Warwickshire landscape.