The Discovery of an Anglo-Saxon Cemetery Atop Burton Dassett 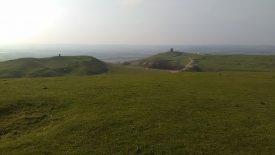 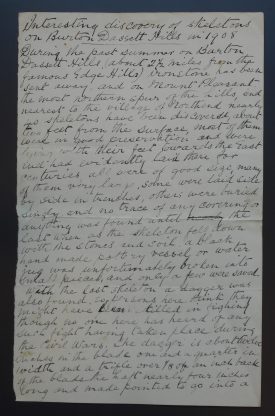 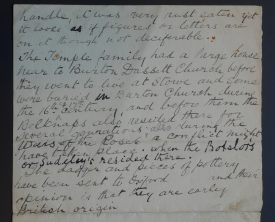 In 1908, men quarrying for ironstone at Mount Pleasant, Burton Dassett, made a remarkable discovery. A few feet beneath the surface they found over 35 skeletons, buried in trenches on the summit with their feet ‘toward the dawn’. It was an Anglo-Saxon cemetery.

At Warwickshire County Record Office, we have a handwritten account of the discovery. It is fascinating and gives us an impression of the excavation process at the time.

Compared to the precise and delicate science of modern archaeology, these people seem like amateurs – and in fact, they may well have been. There is nothing in the account to indicate that a specialist team was brought on site to conduct the excavation. Even if they were, the archaeological method was in its infancy at that time – it would not be until the 1930s that it began to make real leaps forwards. Perhaps, then, we should describe them as pioneers.

The diggers seem to have been clumsier than we would expect nowadays. In this account, we learn that one of the skeletons ‘fell down with the stones and soil’. This caused one of the few artefacts, ‘a black hand made pottery vessel’, to break into small pieces, of which ‘only a few were saved’.

They were also a bit muddled on their dates. Given the proximity of the site to Edge Hill and the famous battle of 1642, the onlookers initially assumed that the skeletons may have been ‘killed in fighting’ in the English Civil War. The discovery of a dagger seemed to lend weight to this suggestion, despite ‘no one here [having] heard of any such fight having taken place during the Civil Wars’.

Is this a dagger I see before me? No, it’s a seax…

The dagger was sent to specialists in Oxford, where they gave the opinion that it was ‘early British origin’. The item was actually a seax, which is an Anglo-Saxon form of knife. It may have been used in battle but it is just as likely to have been an all-purpose tool for everyday use.

What is particularly intriguing is that this account describes some decoration on the blade; ‘it was very rust eaten yet it looks as if figures or letters are on it though not decipherable’. There are other surviving examples of seax blades inlaid with gold, silver or bronze wire, beaten into the blade to form words. For example, the Sittingbourne Seax is inscribed with the names of the maker and the owner, and the Seax of Beagnoth is inlaid with the only known inscription of the complete runic alphabet.

Unfortunately, pre-WWII, ‘people had no real concept of how to preserve archaeological metalwork’.1 Despite dramatic improvements in archaeological conservation since then, the damage has been done and the figures or letters are probably even less decipherable now. Only an x-ray would have any chance of revealing the blade’s secrets.

So what happened to the Anglo-Saxon skeletons? Most were re-interred nearby, but a few are ‘said to have been exported to America as soldiers slain in the battle of Edge Hill’!

Whoops – I won’t tell them if you don’t…

This article was Document of the Month for June 2017 at the Warwickshire County Record Office. Further articles can be found on their website