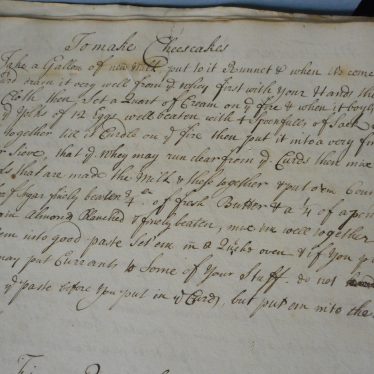 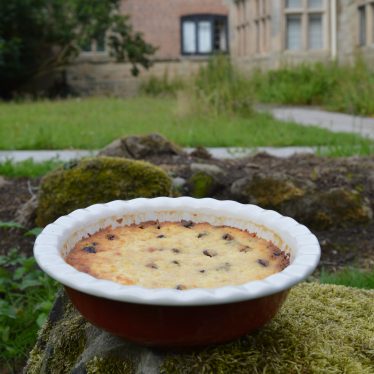 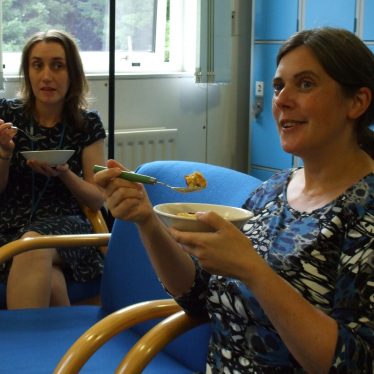 The first archive recipe in the Heritage Cooking Challenge comes from one of Warwickshire County Record Office‘s most famous collections, the Waller Family papers. This collection includes the well-known recipe book belonging to Mary Wise but instructions for this cheesecake come from another book, written by different people and boasting 153 pages of recipes for food, drink and even medicines. The contents are dated between 1711 and 1731 and this recipe is for a fairly standard cheesecake of the time.

Recipes for cheesecakes have been around since the 15th century and were originally defined as a ‘cooked tart made from curd cheese with the addition of ingredients such as eggs, sugar and spices’.

How I did it

I started by making the cheese curds. I used non-homogenised gold top milk in an effort to replicate the ‘new milk’ called for by the recipe. It was pasteurised, but organic raw milk would have been the closest we have to the kind of milk available to cheesemakers in the 18th century.

Most milk available today is homogenised to spread the cream evenly through the milk, but older readers may remember the bottles of gold top left on the doorstep with the satisfyingly thick wodge of cream nestling at the top. This is the best kind of milk for cheesemaking as it sets more solidly once rennet is added.

Rennet is an enzyme found in a cow’s stomach which reacts with milk to coagulate it and separate out the fat solids. Famous cheesemakers Paxton and Whitfield suggest on their website that cheesemaking was discovered by accident in Sumeria, when milk carried in a shepherd’s leather bottle was curdled. Since then a bewildering variety of cheeses have been developed from the same starting point: milk, rennet (or other coagulant like lemon juice or vinegar) and a little salt.  Hard cheeses require a starter culture and lots of time to ripen, but to make a simple curd cheese is easy and relatively quick.

The Wise family cooks would probably have dropped a section of cow’s stomach into their milk to curdle it, but in deference to vegetarian colleagues I used the synthetic version of rennet which is now widely available. I heated the milk to blood temperature and stuck my (clean) finger in to check as there would have been no thermometers available to 18th century cooks! Then I added the rennet. If the milk is too hot it kills the enzyme in the rennet and the curds don’t develop.

After around 20 minutes, the milk solidified and I spooned the mixture into a clean muslin cloth. This hung from a cupboard door for 24 hours to drain they whey into a bowl. I didn’t need this for the recipe, but did not throw it away.   I put it in the freezer to use the next time I make bread.

TIP:  Bread made with whey instead of water has a soft texture and makes wonderful toast!

Once the curds were ready I boiled 500mls of organic double cream and added six egg yolks beaten with sweet sherry.  The recipe calls for sack (which is no longer sold) but as sack was a fortified wine, I substituted some sweet sherry. I expected the eggs to scramble as soon as they hit the cream, but surprisingly they didn’t. The recipe asked me to separate this mix into curds as whey also, but as I didn’t have any I took a chance and mixed the curds into the cream anyway with the required powdered sugar and currants that I had opted to use.  It looked OK!

I spread the paste into the baking bowls and put them into a ‘quick’ or hot oven for 10 minutes. They did not set hard but formed a solid layer that I could spoon the curd/cream mixture onto. After that I put both cakes into the oven and slowly turned it down over 40 minutes from 200o C to 160oC. When ovens weren’t so adjustable, cooks would bake bread in the oven when it was at its hottest, and then cook other dishes  as it cooled, ending with cakes and biscuits as it cooled.  It must have taken some skill to avoid the soggy or burnt bottoms in those days.

The cheesecake was generally well-received by our tasting panel although the mix was too rich for some palates and could perhaps have been sweeter. Why not have a go and let us know what you think? #vintagefood

Visit this page to find out a background to the project.