You are here: Home>Locations>Stoneleigh>Stoneleigh Abbey 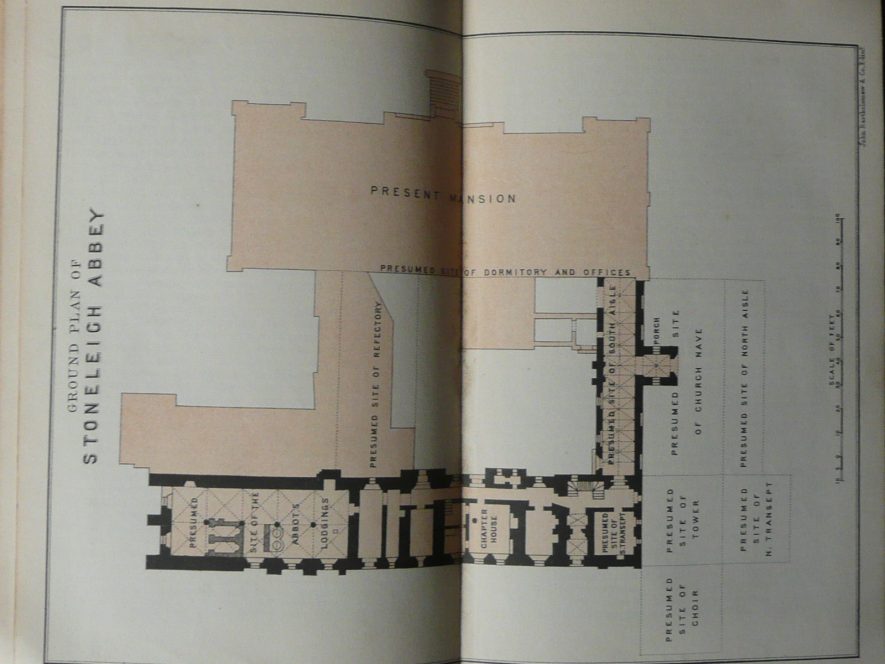 The site of Stoneleigh Abbey, a Cistercian monastery that was founded during the Medieval period. Few traces of the abbey buildings survive above the ground except for the gatehouse. The site is located southwest of The National Agricultural Centre.

1 The Abbey of Radmore was transferred to Stoneleigh in 1154-5. The foundation stone of the church of the new Cistercian Abbey was laid in 1155. In 1241 the monastery buildings suffered severely from fire and in 1288 the Abbot’s House and Gatehouse were burnt by intruders. In 1536 there were eleven others with the abbot.
2 Of Stoneleigh Abbey and its monastic buildings, very few traces apart from the gatehouse (PRN 2904) are externally visible today.
4 An archaeological survey was carried out by Warwick Museum in a field known as the Cunnery. No trace of the monastic rabbit warren suggested by this name were found, but some evidence of medieval field systems and a possible kiln were found.
5 Tree-ring analysis of timbers from buildings and living trees undertaken at Stoneleigh Abbey. The buildings produced an intermittent chronology between AD 1194 and AD 1787 while the trees gave a single site chronology AD 1701-1998.
6 Ancient Monuments Laboratory Report Summary of the above tree-ring analysis report.
7 Market Charter for Thursday; mercartum granted 27th May 1284 by Edward I to Abbot and Convent of Stoneleigh. Fair Charter vigil feast +5 Nativity of John the Baptist (24th June) granted 27th May 1284 by Edward I to Abbot and Convent of Stoneleigh
10 Letter from 1977.
11 Map.
12 Press cuttings from 1983.
13 Study from 1971 following the proposal that WM should take over the West Wing for the Museum.
14 Brief notes.
15 Letter from 1983.
16 A number of fragments of medieval floor tile and moulded stone were recovered from a service trench within the area of Stoneleigh Abbey Cloister, during groundworks for the placement of an oil pipe. This service trench was roughly in the line of former trenching, carried out during 1997-1999.
17 No full report is available on the sequence of watching briefs undertaken at Stoneleigh Abbey between 1998-2001; summaries are available in sources 18–22.
18 Summary of a series of watching briefs carried out at Stoneleigh Abbey, in 1998. Possible medieval walls were located in trenches south of the conservatory, and north and east of the gatehouse. A drain trench across the Cricket Pitch east of the house found the foundations of buildings of the Outer Court. These buildings were probably medieval but others, located in other trenches to the south, in an area where 16th and 18th century plans show mills and other outbuildings, could have been medieval or later.
19 Summary of a series of watching briefs carried out at Stoneleigh Abbey, in 1999. Trenching by the east wall of the East Wing revealed part of the wall dividing the two side chapels east of the south transept of the Abbey church and part of the north wall of the Chapter House. A further wall, running north-south, was revealed c.13m east of the East Wing which may be the original east wall of the Chapter House. Excavations beneath the floor in the Chapter House revealed the base of the
north jamb of the doorway into the cloister with surviving white and red paint. The level of the original medieval floor was visible 0.45m below the modern level. A drain trench in the cloister revealed an area of in situ tiled floor towards the south end of the east alley. This contained a mix of monochrome and slipdecorated, patterned tiles, many severely worn. A further collection of 136 loose tiles came to light in August 1999; this includes 37 designs, including five not previously recorded in Warwickshire.
Excavation of a trench for oil tanks, to the east of the Abbey Gatehouse, revealed a series of substantial medieval walls, which appear to belong to a 13th-century building whose west wall survives as the east wall of the Gatehouse. Another wall ran southwards for at least 3.7m; this belonged to a further building to the east, another part of which was probably recorded to the south-east in 1998. The medieval walls were overlaid by later wall foundations of brick and stone, which probably correspond to a building shown on a mid-18th century drawing. Northwest of the Gatehouse, two undated sandstone walls were uncovered, oriented WSW-ENE. These probably belonged to a building in the outer court, possibly a stable, shown on 18th century plans. Topsoil stripping for a new area of car parking, to the south-east of the main gateway, revealed the remains of the early 19th century covered way that ran between the Stables and the East Wing. The remains consisted of a series of six stone plinths running parallel to the garden wall. This covered way was designed by Smith in 1818, utilising the existing garden wall to the east. The walkway was 1.95m wide and was originally faced with a series of Tudorstyle arches in a similar design to that of the stable block.
20 Summary of a series of watching briefs carried out at Stoneleigh Abbey, in 2000. Features of the post-medieval gardens were recorded.
21 Summary of a series of watching briefs carried out at Stoneleigh Abbey, in 2001. Two burials were recorded, in what may have been the nave of the abbey church. A service trench running west-east south of the south wing cut through two undated stone drains, and a stone wall. The foundations of two greenhouses were recorded in the Abbey gardens.
22 Summary of the 1998-2001 watching briefs included as an Appendix to Richard Morriss’ review article of the development of the abbey.