You are here: Home>Locations>Stratford-upon-Avon>Site of Saxon Cemetery to E of Alveston Manor

Site of Saxon Cemetery to E of Alveston Manor 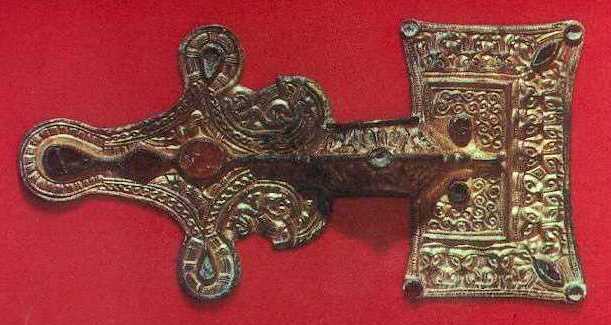 The site of an Anglo Saxon burial site. Archaeological work has uncovered skeletons, cremation burials and hearths. The grave goods included jewellery, vessels and weapons. The cemetery was located to the north east of Alveston Manor Hotel.

1 1934: Human remains found in a gravel pit. At the time when Wellstood made his notes 64 skeletons had been discovered in an area roughly 41m by 46m. Most graves contained extended skeletons. Usually the heads were S and W. 29 of the skeletons were of men, 28 of women and seven of children. One elderly woman had a rich collection of grave goods including a large square-headed brooch, two saucer-brooches, a small penannular brooch, a string of beads, a finger ring and a buckle. Accessory vessels and buckets, spearheads, knives and toilet implements were found. Three or four iron penannular brooches, square headed brooches, saucer brooches and disc brooches occurred. 32 cremation burials were scattered about between the graves. Only a few of these vessels were ornamented. 21 hearths were found. It is uncertain how these related to the graves.
3 1970: More graves were found in W. Three cremations and seven inhumations. The cemetery was bounded by a palisade trench to the S.
4 Noted by Ordnance Survey.
5 Fragments of skull found in a Medieval field boundary ditch in the grounds of Alveston Manor Hotel may have been disturbed material from this cemetery (WA 8218).
6 The excavation of an evaluation trench adjacent to the known Anglo-Saxon cemetery recorded the remains of early Anglo-Saxon features including post holes, pits, gullies and a boundary ditch. Finds included early Anglo-Saxon pottery and an iron arrowhead. No graves were found but a possible disturbed cremation urn and the presence of human bone in a gully and other features suggested the cemetery may have extended into this area. (EWA7309)
7 Total number of burials excavated by Wellstood and Ford was 83 inhumations, 38 cremations and evidence for 4 more destroyed graves.
8 Plan of the site showing features from both 1934-6, and from 1971.
9 Large scale plan of the site showing areas excavated and features up to 1974.
10 Large scale plan of the cemetery from 1971.
11 Draft report with full details of the excavations from both the 1930s and the 1970s.
12 Notes on the analysis of the animal bones found in the 1970/1 excavation.
13 Tables of the bone analysis from 12.
14 Photograph from 1971
15 Excavations in 2002 and 2003 revealed more of the cemetery. The probable south-western edge of the cemetery was established. A particular group of individuals in the south-western part seemed to have been interred later.
16 Post-excavation assessment for the 2002-2003 excavations. Includes a finds summary.