You are here: Home>Locations>Kenilworth>Site of Kenilworth Abbey Chapter House and Cloister 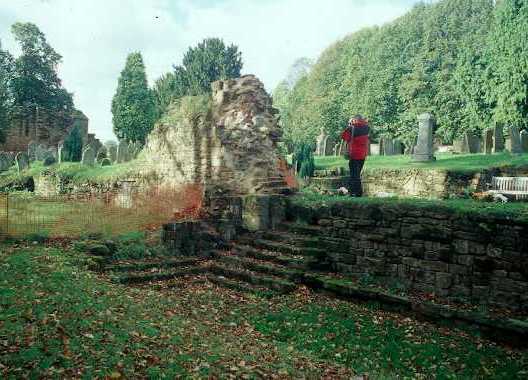 The Medieval remains of Kenilworth Abbey Chapter House and Cloister. The site is at the tennis courts in Abbey Fields.

1 Of the monastic buildings only a few shapeless blocks of rubble survive above ground level. Traces of the cloisters were uncovered, including a 12th century apsidal chapter house to the S of the S transept of the church. The dorter, in the same range, was rebuilt and enlarged in the 15th century. The S range of the cloister, in which foundations of the sub-vault of the frater have been found, seems to date from the 14th century.
2 The walls of the chapter house were for the most part standing to 1.2m to 1.5m above the floor level and to the S side part stands to 6m. It was a large chamber, rectangular at the W end and apsidal at the E, and was about 15m by 8.5m. It was filled with carved stones from a fallen Norman vault.
3 Plan.
4 Photograph.
5 SAM List.
6 SAM List.
7 The site is within the Scheduled area of the SAM of Kenilworth Abbey (Monument Number 35115).