You are here: Home>Subjects>Archaeology and Ancient Sites>Henge>Neolithic or Bronze Age Ring Ditches/ Kings Newnham Site A 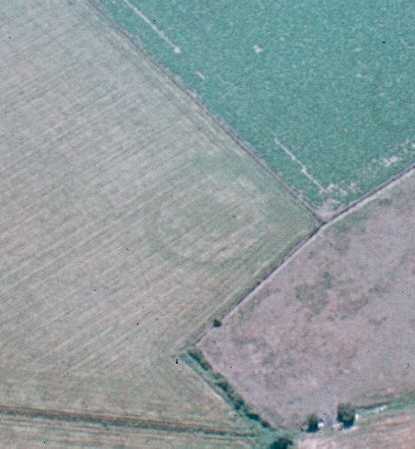 The site of several ring ditches of Neolithic or Bronze Age date. Some of the ring ditches have been partially excavated and interpreted as the remains of a henge, enclosure and barrow. The ring ditches are situated 700m east of Bretford.

1 At Newnham Regis, between Brinklow and Wolston, there are signs of ancient habitations, and three sepulchral urns were found there some time ago.
2 Near the site of the demolished church and about half a mile from the Foss was a tumulus, levelled some years ago.
3 Up to about 50 years ago a tumulus stood not far from the chapel, in which was found a skeleton of unusually large size buried in an upright position.
4 Scheduling information.
5 APs.
6 Air photos indicate at least six ring ditches. These vary between about 20 and 50m in diameter. Some of the ring ditches have two concentric rings. Two are located within a larger elongated enclosure (see MWA5676).
7 The site was partially excavated in 1968. The excavator identified a possible cursus, henge and cremation cemetery.
8 In advance of the laying of a gas pipeline, excavations were carried out in 1989-90. A 10m corridor was excavated, touching the large, northern ring ditch in a group of three, and adjacent linear ditches. The latter were found to postdate the ring ditch. No burials or any other contemporary features were identified, though a single sherd of possible Bronze Age pottery was recovered from the ring ditch. A small quantity of Mesolithic and earlier Neolithic flint was recovered from beneath the area of the central mound and a few similar flakes were found in the ditch. Other features, including RB gullies and undated pit alignments and posthole formations were excavated along the pipeline corridor.
9 Interim report for above excavations. These supported the interpretation of at least this ring ditch as the ditch of a probable burial mound rather than a henge. There is documentary and physical evidence of a central mound, respected by the later linear ditch. The mound is likely to have still been visible in the 16th century when the site housed a rabbit warren referred to in the 18th century as ‘Coney Hills’. A series of sterile pits in the ditch interior probably relate to this warren. Other excavated features included a small curving gully which contained sherds of what may be the earliest known pottery in the county, dating from c3200-2800 BC.
10–13 The cropmarks seen on aerial photographs were mapped as part of the English Heritage National Mapping Project.