Pit Alignment and ?cursus at The Barbellows 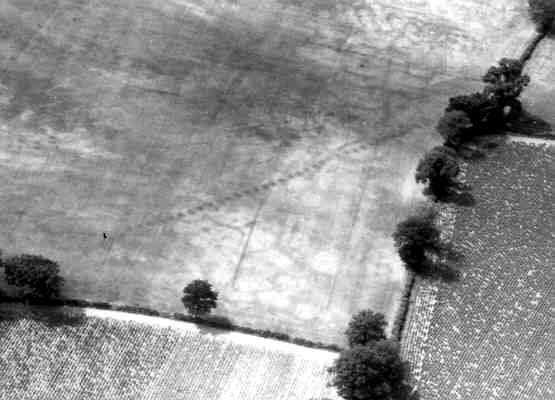 2 A number of linear crop marks and pit alignments show on aerial photographs running in various directions.
3 It was reported that part of this cropmark complex is recorded as a possible cursus monument in Roy Loveday’s (1985) thesis on cursus monuments. The AP SP4074G does show a faint rectilinear cropmark which may represent the remains of a cursus.
4 These cropmarks have been plotted at 1:2500 scale for an SMC application by East Midlands Electricity.
5 The worked carried by East Midlands Electricity on overhead cables did not disturb any archaeological deposits.
6 Following unauthorised ploughing in the Scheduled area, an evaluation was carried out in 1998 in order to establish the extent of any damage to the monument. One of the pits of the alignment and two associated gullies were located. It was established that no damage had occurred.
7 New scheduling information. SAM No. 33149 (was 153).
8 Trial trenching in advance of two lots of new buildings revealed the remnant of a former ploughsoil, modern land drains and modern finds.
9 Date of the pit alignment narowed down to between the late Bronze Age and the late Iron Age.