You are here: Home>Locations>Barford>Neolithic Cursus 400m SE of Barford Sheds 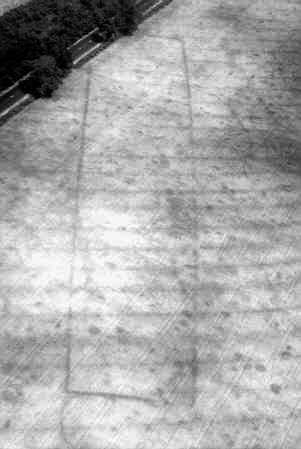 The site of a partially destroyed Neolithic cursus. The cursus was partially excavated in order to determine its shape and size. It can be seen as a cropmark on aerial photographs. It is located 400m south east of Barford Sheds.

1 Part of a complex of cropmarks.
3 A very limited area of the cursus at Barford was excavated in 1972-73, confirming its shape, size and position, and (because it was badly ploughed) little more. More significantly, the C-shaped enclosure at the end of the cursus was totally excavated (PRN 5559). It was termed the ‘mortuary enclosure’ on typological grounds; there was in fact no evidence for this or any other function, nor for its date. The excavator was unable positively to determine the stratigraphical relationship between this enclosure and the cursus, which are tangentially adjacent to each other. Within the enclosure were pits and post-holes, the latter was possibly evidence of a structure whose plan cannot easily be resolved.
8 The site has now been descheduled.
9 The cursus is 700ft long and 95ft wide, which puts it among the smaller size of cursus, the Dorset cursus is six miles long.
10 Scheduling record from 1969.
11 Secondary record card with details of the site.
12 Synopsis of excavations from the 1970s.
13 Letter from the DoE about the extent of the scheduled area.
14 Letters and notes about excavations in advance of quarrying.
15 Note detailing the loan of plans and sections for study purposes.
16 Scale drawings from the 1964 excavation.
17 Plan of the scheduled area, now de-scheduled, see 8.