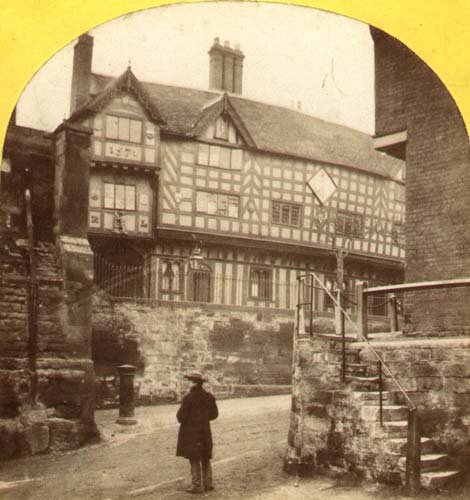 The Lord Leycester Hospital on the High Street in Warwick dates from the Medieval period. It is a timber framed building. Some parts were built or rebuilt during the 14th century.

1 Stands on the N side of the High Street immediately inside the W gate. The buildings are set above the level of the High Street. On the High Street front are several ancient timber-framed houses acquired by the Hospital between 1934 and 1955. Before the 16th century the buildings were the property of the combined guilds of St George the Martyr and of the Holy Trinity and St Mary. Their amalgamation took place in the 15th century but the earliest buildings may have been erected soon after 1383. The remainder appear to have been built, or in some cases rebuilt, before the end of the 15th century. They were originally entirely of timber-framed construction and are set around the four sides of a rectangular courtyard, which is entered through a gatehouse in the S range.
2 Plan of the Hospital.
4 Listing Description.
5 Letter from 1949.
6 Minutes of a meeting in 1953.
7 Letter from 1982.
8 A well was uncovered in 1985.