You are here: Home>Locations>Wolvey>Church of St John the Baptist, Wolvey 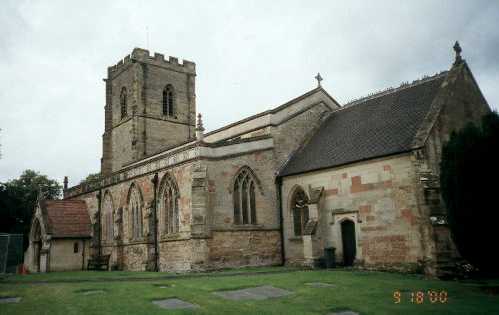 The Church of St John the Baptist was Medieval in origin. It was extensively repaired in the Imperial period, with various additions. The church is situated 100m south of Wolvey Bridge.

1 Chancel, nave, N and S aisles, W tower and S porch. Apart from the S doorway nothing remains of the 12th century church. Rebuilt in the early 13th century and again in the 14th century, the tower being rebuilt or added in the 15th century. Considerably restored: the N wall of the nave rebuilt 1630, slightly N of its original line and re-using old material; the E gable rebuilt 1624; clearstorey rebuilt and nave re-roofed in the 19th century. In 1909 the present stone porch replaced a timber-framed one, and about the same time the chancel S wall, N and S windows and S door were rebuilt. In the N aisle an altar tomb to Thomas de Wolvey (d c1305) and Alice (Clinton) his wife, also a table tomb to Thomas Astley, d1603, and his wife. There was a church at Wolvey in 1086.
2 Plan of the church.
3 Drawing of the exterior, c. 1820.
4 Chancel is all Victorian, but above the E window the date 1624. Early 14th century font bowl.
6 Noted by Ordnance Survey.
7 Archaeological evaluation on the site of the proposed church hall, to the south of the church, revealed a considerable number of intercutting, undated grave cuts. At least one of these contained Medieval pottery dating to the 12th century or 13th century which may have come from an earlier feature(s) cut by the grave. No in situ burials were found above 0.9m below the existing ground level.
8 A further trial trench to the west of those in source 7 revealed the same sequence of deposits. The whole area had been disturbed by graves, with in situ skeletal remains occurring at a depth of c0.8-0.95m. As before, residual fragments of 12th century or 13th century pottery were found, along with a single fragment of Roman roof tile.
9 A watching brief carried out for the insertion of service associated with the church hall identified no archaeological finds or features, although disturbance was generally above the level of remains previously encountered.