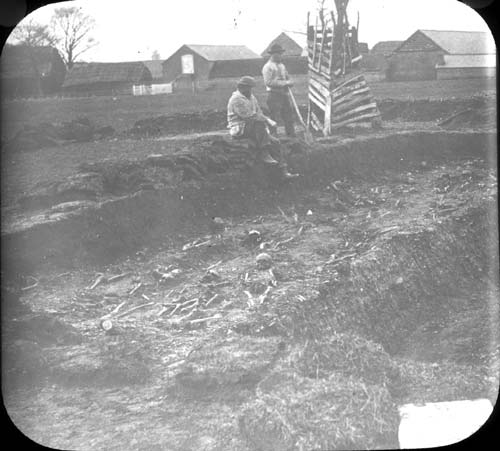 The site of a cemetery, possibly dating to the Early Medieval period. It is located 550m west of Clifford Chambers bridge.

1 The Saxon cemetery at Milcote was discovered in 1866 during gravel extraction. The site is located near the confluence of the Stour and the Avon. At this time more than 400 skeletons were found in a small area. It has been estimated that at least 2000-3000 bodies would have been interred in this cemetery. However no grave goods or furniture was recovered apart from what may be the remains of a wooden club and a fragement of iron. In 1915 a further excavation took place. 20 or more skeletons were uncovered, but again no grave furniture was found. The skeletons were all of male adults, no female or juvenile skeletons were found in either excavation. The only dating evidence comes from a few fragments of Saxon pottery.
2 Information from the present owner claims that bones are still occasionally found in the field.
4 Photocopy of slides.