You are here: Home>Locations>Nuneaton>Memories of The Dugdale Arms, Nuneaton

Memories of The Dugdale Arms, Nuneaton 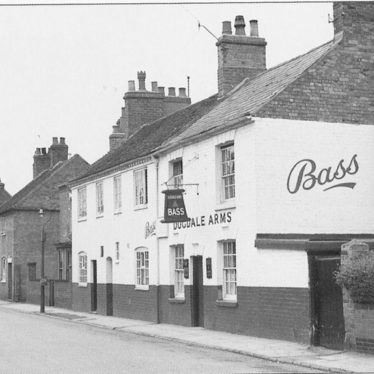 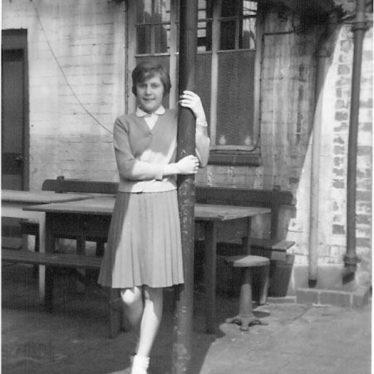 The outside area at the Dugdale Arms, Nuneaton
photo courtesy of Margaret Eastham 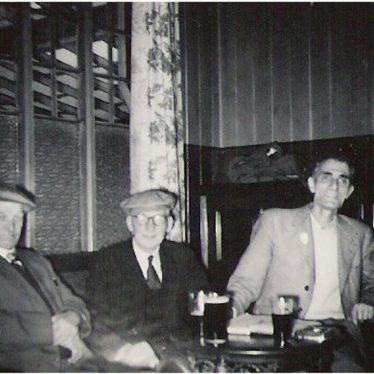 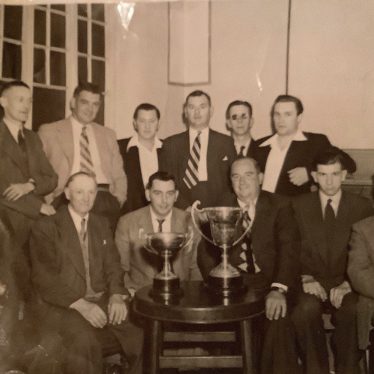 The Dugdale Arms, Nuneaton: Len Hope is standing on the left
Photo courtesy of Margaret Eastham 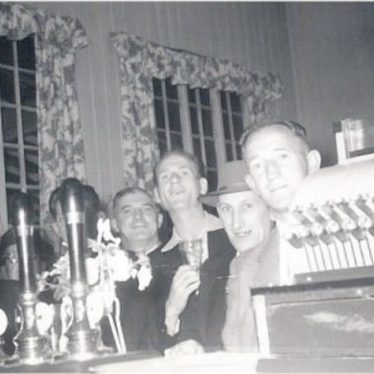 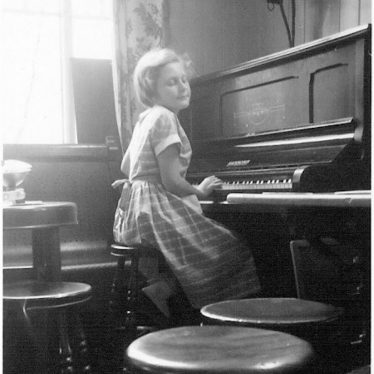 The Dugdale Arms in Nuneaton, also known as The Dug, had been a pub since the 1860s.

For the first 9 years of my life we lived at 36 Dugdale Street, next door to The Dug. Dad worked in the local hat factory but would go next door to help his Mum run the pub. It was only natural that when his mother  died, we all moved in and ran the pub.

The best ale around

There were many pubs in Nuneaton, but the Dugdale Arms was a Bass House which many thought was the best ale around. “Bass is Best” was the slogan used on the beer mats. Certainly the regulars were packed in tight on Saturday and Sunday nights to quench their thirsts. It was a friendly, family, happy pub where banter and laughter resounded.  It opened every day and was popular with miners going to or from work.

Darts and Dominoes matches were a regular feature at weekends. Batches filled with Leicester cheese and a slice of Spanish onion were eaten with relish.  On match nights the regulars were shoulder to shoulder, laughing and chatting loudly, just to be heard.

A the weekend there were singalongs. The old piano in the bar would be played by Les Spencer or Dolly and the singing would start with songs such as “It’s a Long Way from Tipperary” and “Roll out the Barrel”.

Customers liked their chosen room and seat! In the small corner in the entrance was a table and a couple of chairs. The wall behind was decorated with saucy postcards sent by customers from places like Blackpool. The private living quarters, the Outside, the Bar and Taproom all led from this corner. The Taproom was considered the quieter area where sometimes wives would accompany their husbands. A welcoming open fire was in the centre with comfortable wooden seating around the walls.

The Bar Room had a tall window which reached to the high ceiling, where silk weaving took place in the 1800s. A hook in the ceiling was used at Christmas time to hang paper chain decorations from. An enclosed fire was in one corner, the upright piano in the other. Tables, chairs and seating matched those in the Taproom. Opposite the piano and fire was a small, long, narrow bar with traditional beer pumps. Drip trays and cloth mats were placed to soak up any spilt beer. Rows of glasses shone from the shelves behind, each neatly decorated with paper serviettes. All the empties lined up by the sink. A TV was in prime position, high enough for customers to watch Coronation Street and The London Palladium.

The Duggie had an Outdoor and Snug. Both were small and narrow with a frosted glass window where orders were given. The Outdoor had a wooden bench, smooth from being used by waiting customers, pressing the bell impatiently. This is where children went to buy a pint of freshly pulled ale for for their parents. They were under age so a sticky label had to be stuck over the cork of the reused bottle, to prove that it was not for them!

Ladies, on their own, would frequent the Snug. It had a table and chairs as well as a bench and there was always a warm, welcoming fire on a cold day. They were well shielded from the rest of the pub. From the bar one could hear the tap-tap, tap-tap of a coin as an old lady waited to be served.

The pub was not to last forever, however.