You are here: Home>Locations>Warwick>Farewell to the Great Western in Warwick

Farewell to the Great Western in Warwick 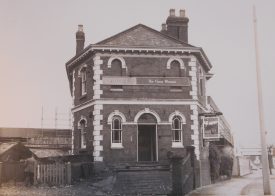 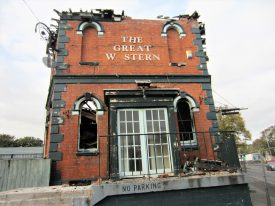 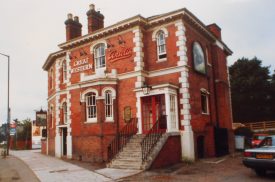 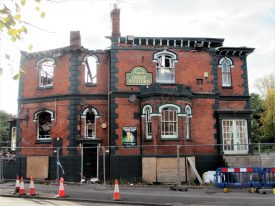 It is sad to see the remains of the Great Western pub that has been badly damaged.  A fierce fire broke out in the afternoon of 24th August 2017 and was attended by four fire engines and an aerial platform. The flames were said to have been 20 feet high with smoke affecting the surrounding area; roads nearby had to be closed. In spite of the fire service’s best efforts, the fire destroyed the roof and much of the interior of the building, arson being suspected.

Early history of the Great Western

This Victorian building is named after what was then the Great Western Railway station nearby. John Crossling notes:

Despite its location there is no record of its use as a coaching inn or even for carriers except for a very brief period in 1891 when there was one daily carrier but unfortunately its destination was not listed. Although this pub is today known as the Great Western it was originally known as the Great Western Hotel, and no doubt provided accommodation for travellers arriving and departing in Warwick by train.

Trade directories record the publicans who served there from 1862 onwards. These included Richard Slater (from 1874-1886) who was also recorded as a ‘car proprietor’ in 1881 (probably a taxi cab) and an ‘agent for the Great Western Railway’ in 1885. There were two female publicans: Mrs Such took over in 1924 from a relative, William, who had been the publican for the previous twelve years; also Mrs Ellen Power presided from 1933-1945. At one stage the pub (along with many others) was owned by the Leamington brewery firm of Lucas & Co.

The pub was a popular place for a drink and a meal, with a pleasant garden tucked away at the back and regular sessions of live music.  It closed in June 2015 and has stood empty since then. A planning application was made to convert it into residential use. It was for sale for around £450,000 and believed to be under offer when the fire occurred.