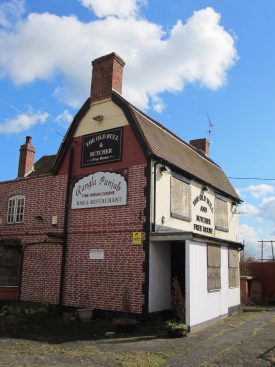 The Old Bull and Butcher at Ryton, 2013
Anne Langley 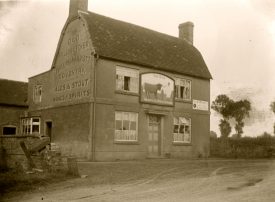 The Old Bull and Butcher pub at Ryton on Dunsmore.
Warwickshire County Record office reference PH827/2/26. Reproduced with the permission of the Local Studies Collection at Rugby Library.

The Old Bull and Butcher was a public house in Ryton on Dunsmore on the A423 Banbury Road.

The pub first appears in the Victuallers’ Recognizances in 1819, with Joseph Olorenshaw as the publican. By the following year Richard Franklin had taken over and he continued there until at least 1828. (Details of publicans at that time were recorded in the ‘Victuallers’ Recognizances’ which can be consulted on the Warwickshire County Record Office website.) The Wroth Silver breakfast has sometimes been held in the attached conservatory.

Theft of a bath-tub

Recently the building has changed hands regularly, its last incarnation being as an Indian Restaurant whose red brick decoration is not really in keeping with the original style of the building (see the photo). Sadly it is now empty and being vandalised. Last year I saw a cast-iron bath poised half-way out through the upstairs window (presumably the thieves had been disturbed); unfortunately this had vanished again before I got around to taking this photo.

A man who was evacuated from Coventry as a child during the second World War said it: ‘was an isolated building with no houses nearby, that seemed to cater to a more casual, passing trade though, for a young boy, it had the advantage of having a large lawn where one could run around’. Do any readers have other memories of it in happier days? Or photos of it before the repainting?