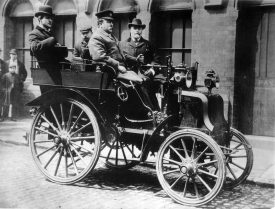 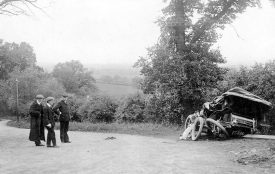 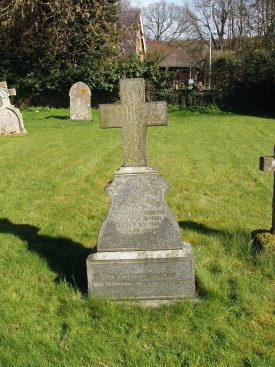 We’re accustomed these days to the sad news of fatal car-accidents on a daily basis, but in 1899 petrol-driven internal-combustion vehicles had only recently been invented and were an uncommon sight on the highways which were dusty, stony, unsurfaced and often narrow.1 So the memorial stone marking Williamina Macleod’s grave in the churchyard of St Peter’s, Radway, records a most unusual event. It states that she ‘met her death in a motor car accident at Edge Hill on September 17th, 1899 aged 50 years’, recording one of the first car-accident fatalities in Britain. The tragic ending to a happy Sunday jaunt involved not only Williamina but also the occupants of Radway Grange. For a few weeks this quiet village became the centre of a shocking news story, reported not just in Warwickshire but as far away as Norfolk, Suffolk, and Lincolnshire.

Williamina (more usually Mina) Macleod or McLeod was housekeeper at Radway Grange to Mrs Henrietta Jameson (1851-1928), wife of the Irish whiskey distiller, William G Jameson and daughter of the wealthy Scots distiller, John Haig. The Jamesons had properties in Edinburgh and London but rented Radway Grange in the winter months (from the Rev. Sanderson Miller, vicar of Whatcote), mainly for its proximity to good hunting with the ‘Warwickshire’, which sometimes met there. Henrietta’s youngest brother, Douglas (later Earl) Haig (1861-1928), sometimes visited for winter hunting when his army service allowed.2

In mid September 1899, Henrietta’s younger brother George Haig (1859-1905) and his wife went to stay at Radway, travelling from their London home in a 6-seater Daimler to be used during their visit. The driver/engineer, supplied by the car hire firm, was Albert Breakwell. Newspaper reports of the accident and the resulting inquest suggest that (with the Haigs’ permission) on Sunday morning a week after their arrival, Breakwell successfully took some of the Radway Grange staff up and down Edgehill to test the car. In an afternoon test-drive he took five of the staff to Avon Dassett to visit Henrietta’s former housekeeper. They were the butler, George Metcalfe, who had also been out that morning and on the second expedition was sitting on a ‘jump-seat’ behind the driver, Mina’s niece, Maggie McLeod, who was sitting next to the driver, and Thomas Rushworth the gardener, Amelia Ehrhardt, Mrs Haig’s lady’s maid, and Mina all on the back seat. They returned from Avon Dassett via Arlescote soon after 5pm.

Reports of the exact circumstances of the accident are conflicting. The Arlescote road joins the Edgehill road from Banbury well below its steepest point, and the party arrived safely near the Radway turn where the road begins to level out. Breakwell then drove back part of the way up Edgehill. He turned round and drove the party down the hill, with the brake off and probably a good deal faster than he had done that morning. Some passing cyclists estimated a speed of 30-40 miles per hour. When the vehicle was almost on level ground again it suddenly lurched towards the verge, possibly to avoid a car coming the other way, throwing the occupants into the road. Breakwell lay unconscious with a fractured skull, Amelia Ehrhardt had a sprained shoulder but Mina, shocked and with pain in her hip, seemed otherwise unhurt. Dr Fenton was fetched from Kineton and the injured were taken in a cart to Radway Grange. Mina complained of being cold and numb and was given a hot drink and put to bed, but late that night she died from internal injuries.

Mina’s funeral service and burial were held on 20th September by William Westacote, vicar of Burton Dassett.3 The same day, the inquest opened at the Radway Institute. Evidence was heard from Mina’s sister, Jessie McLeod; George Haig; George Metcalfe the butler (who was the least injured); Dr Fenton; and the car hire company manager. It was adjourned until October 13th when Breakwell had recovered sufficiently to give evidence. The coroner mentioned the possibility of a ‘manslaughter’ charge against Breakwell but the jury eventually returned a verdict of ‘Accidental Death’, although Breakwell was censured for not taking due care, resulting in Mina McLeod’s death.

The newspaper reports are worth studying for the information they give on the lack of medical care in late Victorian rural Warwickshire. It took nearly an hour for the doctor to reach the accident scene from Kineton. The injured, including Breakwell with a fractured skull, were taken not to hospital but to Radway Grange in a cart for treatment by untrained household staff.4 With the ambulances and hospital emergency services we have today, Mina’s injuries would probably have been immediately investigated and possibly her life saved. We could reflect too on the undeveloped engineering of cars at this period and the poor quality of roads. It was only in 1896 that steam- and combustion-engine vehicles could travel legally on the highway at a maximum of 14 (usually restricted to 12) miles per hour without being preceded by a red flag.

1 See the road surface in the photograph of a car accident on nearby Sun Rising Hill in June, 1907.

4 Only Mrs George Haig’s maid, Amelia Erhardt, mentioned being ‘in Guy’s Hospital since the accident’, presumably on their party’s return to London.