You are here: Home>Locations>Atherstone>Suits You Again, Sir: Some Years in the History of 47 Long Street, Atherstone

Suits You Again, Sir: Some Years in the History of 47 Long Street, Atherstone 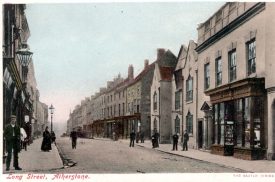 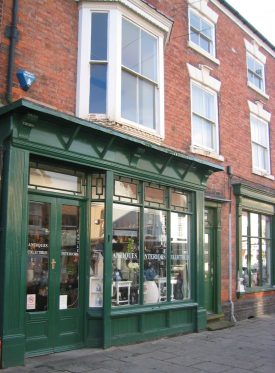 John Cooper Barnsley was in business in Atherstone for nearly four decades, up to just before the Second World War.  He was both a manufacturer of mineral water and a retailer of clothing and house furnishings, with a clientele drawn from Atherstone and the surrounding settlements.

Did Mr Barnsley direct the flattering comment “suits you, sir” to his clients?  The written evidence is silent on this, but his order books indicate he took pains that his garments made the best of clients’ good physical features whilst deflecting attention from their less attractive ones. In addition to customers’ measurements, Mr. Barnsley’s notes add specific details on individuals. There were frequent references to clients’ posture, for example, whether or not they stooped, or other physical details such as “very tall, long neck ”, or “corpulent, short neck”.1 The concern with posture is suggestive both of contemporary ideals of manliness and that concerns with body image have a long history. Particular personal information was also noted, for example “…smart looking young man. Take special care”; possibly a coded message that here was a customer with that heady combination of a sense of style and youth to be encouraged and carefully handled in the expectation of repeat orders.2

Although the majority of clients were men, there were a few female ones, ordering skirts, coats, or skirt suits. An order in 1918 for a ladies’ skirt suit mentions “design 246” for the coat and a skirt length of 35 inches, but there is no indication what this design looked like.3 It seems that by the early decades of the twentieth century, monied women were not inhibited from patronising a bespoke service catering predominantly for men. Women’s posture was not noted, as good deportment was expected and unexceptional in women sufficiently affluent to order bespoke outfits. Instead, measurements were taken of waist, hips, skirt length and whether or not a corset was worn. Differences between waist size corseted and uncorseted were also recorded.

It is unlikely that such intimate task of measuring and fitting female customers would have been undertaken by a man. It was commonplace for wives or female relatives to work in the family business, although their labour frequently went unremarked.  In this case, the most likely candidate would have been Mrs Barnsley, described in the 1911 Census as working in the shop.  She was experienced in clothing skills from before their marriage; in the 1891 Census she was described as a “felt hat trimmer”, which indicates an eye for detail, care in handling fabrics, and an ability to take accurate measurements.

Mr Barnsley’s order book for 1914-1919 shows how ordinary life carried on despite the War. Those with sufficient income could continue to order made-to-measure clothing without sanctions of rationing. Another Warwickshire outfitter and tailor, Major Hall of Leamington Spa, made military uniforms as well as civilian clothes during the War but the nearest Mr Barnsley seems to have come to supplying uniforms was an order in June 1902 for the Church Lads’ Brigade Band.4

The surviving records from the early 1920s show that post-war orders were eclectic – Mr Barnsley was justified in describing himself as a “general outfitter and furnisher”. We see orders for boots and shoes, women’s ready-made clothing, textiles by the yard, table linen, furniture, cutlery and crockery. In the period from July to December 1920, for example, customers in Dordon bought an Ingersoll watch, a bedstead with mattress, slippers, and lengths of fabric. Signs of the times in the 1920’s were orders for “motor leggings” and travelling rugs.5

John Cooper Barnsley ran a successful small to medium-sized firm in a provincial town in the English Midlands through periods of modest prosperity before the First World War. It survived, possibly even flourished throughout the war’s duration, followed by a post-war boom. The collection does not show how he fared in the depressed trading climate of the 1930s but it has to be assumed that the business kept afloat at least until his death.

This is a small collection of business records, potentially of interest to a variety of researchers, including local historians, fashion historians, historians of the history of consumption, looking at how provincial households were equipped and decorated, and family historians, given that details of customers’ measurements and physiques may provide extra information about relatives.