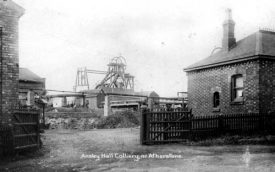 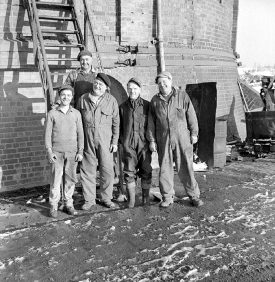 For the first nine years, Ansley Hall Colliery extracted coal from the Two Yard and the Bare coal seams. By 1882, the colliery had exhausted all the coal and would have been forced to close if not for the technological advances that allowed them to extract coal from down the dip using inclined headings. Level roadways were then driven out either side of the incline, but the severity of the incline meant that the colliery’s profitability was limited by only being able to use small tubs. In 1889, Garside Philips embarked on an investment programme which allowed for the use of larger tubs, increasing the colliery’s output.

Garside Philips had undertaken the investments on the understanding that John Beaumont Ludford-Astley of Ansley Hall would lease further mineral rights as they were acquired, however Ludford-Astley suddenly refused to lease them, and instead offered Ansley Hall and its estate for sale. To avoid another colliery proprietor sinking a colliery on the site and secure the mineral rights, Garside Philips bought Ansley Hall and its estate in the colliery’s name in 1892.

In 1921, Garside Philips retired, and the management of the colliery was taken over by his son, J. H. Philips. By this time the mining industry was in decline, and the colliery brickworks began to cut back on labour. In 1927, Ansley Hall Colliery came close to closure after a fault halted production on one of the coalfaces. The colliery was run at a loss for three months until a new underground district was ready to be worked. Garside Philips died in 1929, and the ownership passed to his son. By this time, the colliery brickworks employed only four men. Pithead baths were built on the opposite side of Coleshill Road and were opened in 1938.

Nationalisation of the coal industry

By the time the coal industry was nationalised in 1947, Ansley Hall Colliery was suffering from a lack of investment. The country was suffering from a fuel shortage, and a government directive to produce coal at any cost meant that this lack of investment was unimportant at this time as the cost of production was subsidised. In 1955 the economic climate changed, and the colliery was required to increase its efficiency and produce cheaper coal.

An industry-wide shortage of manpower led to experienced miners being brought in from declining coalfields in other parts of the country, and men of stateless nationality were brought in from the refugee camps at Germany. The shortage of manpower persisted at Ansley Hall Colliery, resulting in all available men being put on productive facework, rather than on roadway repairs. The underground roadways became neglected and rapidly deteriorated. This deterioration had an impact on the efficiency of the mine, and it became difficult to get essential supplies to the working coalfaces. Profitability dropped until it was irrecoverable, and the colliery was scheduled for a phased closure in 1959. The shafts were filled in and much of the plant was demolished, however the surface site was not completely abandoned as part of it became the National Coal Board’s Area Workshop and Stores.