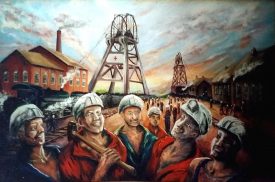 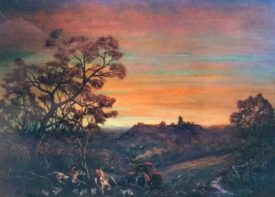 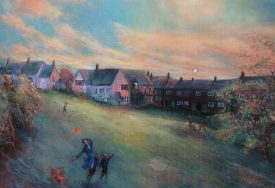 I used to paint with five other painters, and I’m the only one of the five left – the others passed away quite some time ago. They called us the Tamworth Five. They brought artists up from London and we used to sit with them. Michael Tain was one – you know Gordon Richards the jockey? He used to paint for his father, he bought a lot of his paintings. There was a fund that used to provide the money for this (I think it was the Carnegie Trust) it wasn’t just the artists, they also funded drama and music classes and they came up, but then the money ran out.

I won my first prize when I was seven, I painted a plum, that was just before the war ended, that was rare then. and I’ve painted ever since. I was self taught, but then they said why don’t you enter some of the exhibitions? So I entered at the Herbert, and then RBSA (Royal Birmingham Society of Artists). As you went in their building, mine was the first painting you saw. My tutor said they’d been trying for years to get something accepted by them; I tried first time and managed it!

And then I was asked by 3M, the American company who had an office in Atherstone. And they had some money they needed to spend in the community so they asked me to paint a couple of pictures – of the colliery and the ball game – they’re both hanging in Bracebridge Court in Atherstone. I didn’t ask for any royalties, I said if they made any money, it could go to the old peoples’ home. They also did a Christmas card of one of my pieces.

Selling my work… or not

In London, artists are contracted to a gallery. I’ve never done that, I’ve never had much interest in selling my work and I’ve never gone out to sell any. My son Matthew was an athlete, he won the three counties run, and was Warwickshire champion, he ran the  500 metres and did the high jump. At the age of 13 he held the age record for highest jump. Anyway, he put some of my paintings on the internet and sold them! I said that he could have any money he made for university, so he sold a lot!

Although people have asked me to paint things I’m happier painting what I choose to, but if somebody asks me to paint something, I’ll paint it! I don’t mind!

With the colliery, there was an argument over the miners. Some wanted them painting with blood and sweat, while more people wanted them together, as a community, laughing and being jovial. So in the end I did both. On one of the miners, their whole hand was on top of the axe they were holding, and a 12 year old boy said of him, ‘he’s got six fingers!’ But there was a miner who had six fingers in actuality!

The painting of the hunt, the dogs were kept in Witherley. I remember them coming through Atherstone in the streets with the horns blowing, and the dogs running everywhere. They even went into the butchers and ate the sausages!

There was a man with the name Crow, this area is called Crow Hill. And he sunk a lot of mine shafts before the pit. And when Dugdale sank his mine shaft, he paid the worked a penny more, so they all went to work for him instead. That’s how the mine started. There were shafts in the wood they didn’t fill in, I used to throw bricks down them. One day they could hear a cat miaowing, so they got the fire brigade out, and lowered a man down backwards to rescue it. It was then they realised they needed to fill them in!

The picture of the ball game, the factories are knocked down now, and there’s no garage there either. With the factory, there was a bridge that meant you could walk over the road to the other factory. They sold the hatting machinery to Russia, apparently.