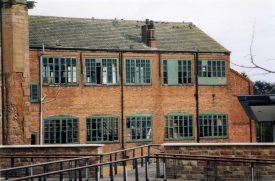 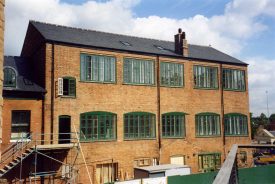 This is the last remaining former ribbon-weaving factory in Coventry; it stands in New Buildings and was occupied by Exchange and Mart in the 20th century. It had been standing derelict, but was rescued and turned into flats in 2002. Today you can see it clearly from the walkway that leads over the ruins of the old Coventry cathedral towards the steps down to the Visitor’s Centre. Fortunately the conversion has maintained the character and appearance of the building.

The silk weaving trade in Coventry

Coventry had been involved in the silk trade since the 17th century. Originally silk was woven on hand-looms in people’s houses. There was considerable opposition to mechanisation but eventually factories like this replaced home-working. By the middle of the 19th century, half the working population of Coventry was employed in the silk industry. Imported silk was ‘thrown’ (twisted and doubled) then dyed and finally woven in factories like this. They made ribbons for trimming Victorian ladies’ dresses and bonnets and other articles out of silk. This factory may have been the one rented out to George and William Herbert in the 1820s: they were listed in a trade directory as Silk Throwsters of New St. Coventry and Brandon Mills.

Did you or your ancestors work in the silk trade in Coventry? Do tell us about it if so.