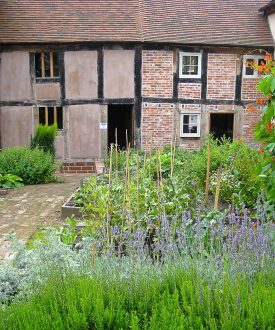 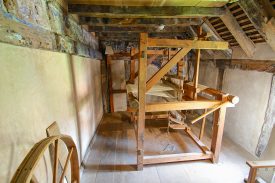 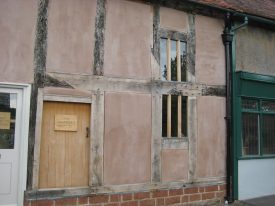 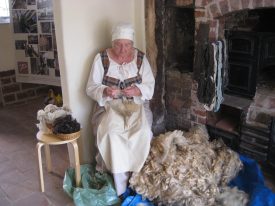 The Weaver’s House has been restored to show how it would have looked in 1540. This shows how John Croke, a Coventry narrow-loom weaver and his family would have lived and worked. You can also see a replica of the loom that he would have used. The Weaver’s House is a two storey building, the upper floor containing the loom is accessed by a ladder. At the back of the building is a medieval garden showing the plants that would have been grown for food, flavouring, medicine and household use.

One of a number of cottages

The Weaver’s House in Coventry is one of a number of cottages on Spon Street, one of the most important historic routes in Coventry. It forms part of the east-west axis running through the city which led on to Fleet Street, High Street, Earl Street, Jordan Well, Gosford Street and Far Gosford Street. People would have come down Spon Street towards the city from the important cities to the North West such as Lichfield or Chester.

This part of Spon Street was called Spon Causeway as it formed a causeway across the flood plain of the Sherbourne leading to Spon Bridge. We are just outside the Spon Street bar– also known as the bar gate, literally a bar across the road which may even have pre-dated the city wall. This was the point beyond which people had to pay a tax or toll to enter the city. The gate closed at 8.00pm and re- opened at 5.00am. So if you arrived late you either lodged for the night (hence the pub on the corner) or you took Barras Lane (possibly named Bar’s Gate Lane previously) and bypassed the city via the high ground to the north.

Our six cottages were built as one structure in 1455 replacing some existing buildings, which presumably had either been not so well built and had become derelict, or had suffered some catastrophe such as a fire. They were built by the Priory for rent. The cottages were all built to the same plan with just three rooms and they were what we would today call live-work units – people had their businesses and lived in the same three rooms.

After the dissolution, the king acquired and sold off the cottages almost immediately. By the 1570s they belonged to the mercer’s company, one of the large number of craft guilds in Coventry. By 1700 they were owned by the Pickering family and this remained the case for approximately 100 years. Eventually the Pickering children split the terrace up, so what had been administered as a single range of cottages now went in different ways.

Inhabitants and trades in the 19th century

In the 19th Century census records of the terrace provide a picture of local industrial development.

In 1841, the cloth trades still dominated the economy of the area with nearly 50% of the occupants involved in the area’s traditional trades of weaving and dyeing. The close proximity of farmland is also demonstrated by three farm servants living in the terrace. Shoe-making, pipe-making and watch-making are also represented. Ten years later, the emphasis had shifted to the silk trades, with over two thirds of occupants employed in the silk ribbon industry. The collapse of the silk ribbon industry and the rise of watch-making can then be charted through 1861 to 1871, By 1891, nobody living in the terrace was employed in silk or cloth-weaving or dyeing. Most families relied on watch making, although the new growing industry of cycle manufacture was a secondary household employment in five families.

Between 1900 and 1914 the frontage of the terrace was slowly converted to shop fronts and by 1905 the Black Swan Inn was also closed. However the precision skills of the watchmakers were now being redeployed by the bicycle, motorcycle and motor car producers springing up throughout the city.

This is an abridged version of the history of Black Swan Terrace to be found on the Weaver’s House website. For more details about the house, visit their pages.

Map marker in the right place? If not, please correct the map.
Locations
Coventry (103)
Subjects
Textile and Clothing (20)
Weavers (17)