You are here: Home>Locations>Brownsover>Sir Frank Whittle, Inventor of the Jet Engine 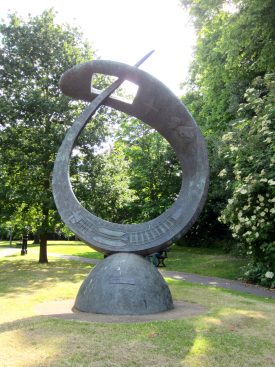 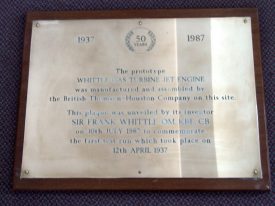 Plaque from BTH site celebrating 50 years since the first test run of the gas turbine jet engine in 1937
Jim Seward, courtesy of Alstom 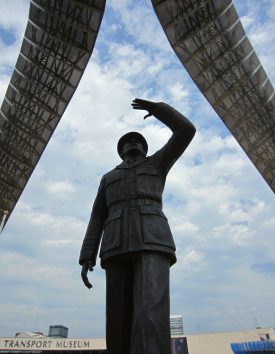 Frank Whittle was born in Earlsdon, Coventry, in 1907. His family moved to Leamington Spa where he attended Milverton School and then Leamington College for Boys. He worked in his father’s small engineering firm. Fascinated by aerial flight, he joined the RAF as an aircraft apprentice (though only after failing the medical twice!) eventually becoming a (rather rash) pilot. He studied engineering at Cambridge University and registered a patent for a new kind of engine for aeroplanes in 1930. He founded a company ‘Power Jets Ltd’ in 1936; their design staff worked at Brownsover Hall and made use of facilities at the British Thomson-Houston factory in Rugby. The first engine test run was made on April 12th 1937.

Development moved to the BTH foundry in Lutterworth but subsequently involved various firms and made rather difficult progress – partly because of the war and officialdom; Whittle found these pressures very stressful. He was promoted in his career in the RAF and eventually given a knighthood and many other honours in recognition of his brilliant pioneering work. He married in Coventry in 1930 and had two sons; moved to America, divorced and married again and died there in 1996.

A plaque about Whittle’s work used to be displayed at the BTH site; it was rescued when the building was demolished and kept safely by Alstom who are kindly donating it to Rugby Museum. A modern sculpture and explanatory board about Whittle’s invention stand near the entrance to Caldecote Park in Rugby. Stephen Broadbent’s inspiring sculpture includes a world map of flight paths on the base and represents a propeller transformed into an internal turbine; it was partly inspired by a photo of the first test engine at the BTH factory (shown on the board).

The site of his first test work

The Sir Frank Whittle Business Centre in Rugby stands near the site of his first test work at the BTH factory. A statue of Sir Frank by Faith Winter stands proudly under the Whittle Arches outside the Transport Museum in Coventry; it commemorates the first test flight of a jet-propelled aircraft in 1941. And finally a model jet aeroplane commemorating Whittle startles passers as it rises from a roundabout on the outskirts of Lutterworth (but sadly that’s in Leicestershire!)