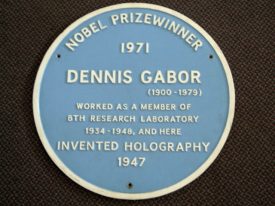 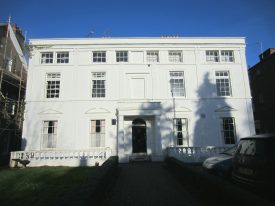 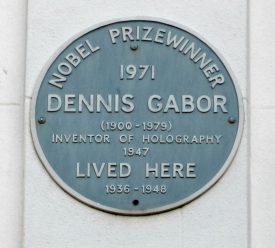 Gabor Denes (who later anglicised his name to Dennis Gabor) was born in Budapest in June 1900 and studied mechanical engineering at the Technical University of Budapest and at the Charlottenburg Technical High School in Berlin; his undergraduate thesis at Charlottenburg was on problems of high voltage transmission. He later worked on improvement of the cathode ray tube. After obtaining his D. Ing. he worked for Siemens improving the mercury vapour lamp.

Problems with the Nazi government

In 1933 the Germans elected the National Socialist government and as Gabor was of Jewish ancestry he returned to Hungary but was unable to find paid work. Whilst at Siemens he had collaborated with scientists from Metropolitan-Vickers who put him in touch with the British Thomson-Houston Company (BTH) at Rugby; to whence he moved in 1934. He quickly made friends and was able to tell his family that the English were not as cold as portrayed and that he had made more friends in 13 weeks than he made in 13 years in Germany. His friendship with Marjorie Butler, an engineering tracer at BTH, with whom he shared an interest in choral singing, resulted in their marriage in August 1936. They moved to a large house on Bilton Road where a blue plaque records the fact.

The electron microscope and other inventions

Whilst in Berlin he had, with Leo Szilard, drawn plans for the electron microscope, but they thought that the energetic beams would destroy any organic matter being observed. The first electron microscope was actually made with apparatus which he had left in Berlin, the problem of dealing with organic materials being overcome by spraying the sample with osmium or gold. Nevertheless, a significant proportion of his work in Rugby was on the focusing of electron beams. During the early part of the war he was, as a Hungarian, not allowed access to BTH’s sensitive work but worked at home, solving (or attempting to solve) problems brought to him by his director at weekly meetings. He was not aware of radar but started to develop a heat sensing device which he hoped would pick up the heat of aircraft engines; this was dropped in 1943 when he returned to working at the BTH factory. In 1946 he worked on the compression of telecommunications data as the transatlantic cable was running out of capacity.

The invention of Holography in Rugby

The invention for which he received the Nobel Prize came about at Easter 1947 when he was waiting to play tennis at St. Andrew’s Tennis Club (now the Co-op funeral parlour on Bilton Road). He had a flash of inspiration and dashed home and invented the hologram (it is not recorded if his deserted partner got her game): despite much work within the AEI group this could not be perfected until the invention of the laser. He was awarded the Nobel Prize for Physics in 1971 for his invention of the hologram, although he always disliked being called a physicist and insisted that he was an engineer. In his Nobel lecture he outlined the uses of the hologram, where in addition to making it impossible to copy documents (and currency) he listed: identification of flaws in welds and tyres (not visible to the eye), storage of many pages of literature on a single sheet, recording the shock waves of a projectile and the translation of Chinese and similar characters into Roman script.

Move to London after the war

Dennis left BTH and Rugby at the end of 1948 on his appointment as Reader in Electron Physics at Imperial College. He was elected a Fellow of the Royal Society in 1956 and was appointed to the Chair of Applied Electron Physics (at Imperial) in 1958 at which time his group were working on colour and flat screen TV, computers and the focusing of plasmas. As well as his university work he acted as consultant to the Post Office and to AEI. Gabor had over 100 patents to his name, these were shrewdly licensed or sold and in preparation for his retirement in 1968 he was able to have a house built at Anzio (between Rome and Naples) whilst still retaining his residence in a fashionable part of Kensington. During his retirement he worked as Honorary Fellow at Imperial College and a staff consultant at CBS.

Publications on a wide range of topics

By the 1950s many believed that with automation and nuclear energy we were entering a world of leisure and prosperity, Gabor believed that society was already at that stage but was unable to cope with not working and was filling the day with meetings and paperwork. Some of his thoughts on this subject were incorporated in his lecture given on appointment to his Chair, but were much expanded in his book Inventing the Future (1963) where he thought that there would be work for only the 25% of the most intelligent or industrious in society. He speculated on how the remaining population could usefully spend their time. Innovations followed in 1970 and listed 137 inventions and changes predicted to change society (reading this 45 years later makes one realise the wisdom of whoever said that making predictions was unwise, particularly about the future). The Mature Society (1971) outlined his views on how the world would have to be organised. Gabor was a member of The Club of Rome, the group of some 70 academics and industrialists who attempted to put some rigour into the assessment of environmental problems; the Club is best known for The Limits to Growth (1972). Gabor was co-chairman of the group which produced a later publication of the Club Beyond the Age of Waste (1978). However, Gabor had a stroke in 1974 which restricted his capabilities, he died in London in February 1979.

This is a brief summary of a talk given to the Stretton on Dunsmore History Society.

Gabor was a true polymath, more information can be found both on the internet and in scientific encyclopaedias. The most comprehensive outline of his life and work is probably: T E Allibone’s Dennis Gabor (in the series Biographical Memoirs of Fellows of The Royal Society).

email
More from Rugby
More from Scientists and Engineers