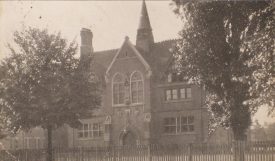 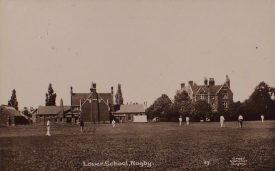 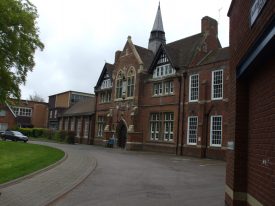 Say you went to school in Rugby, and if you are outside of Warwickshire there is a fair chance you will have to clarify this does not have to mean you went to Rugby School. One of the state schools, however, owes its foundation to the Great School.

Origins of the school

Rugby School was originally founded thanks to a bequest from Lawrence Sheriff, grocer to Queen Elizabeth, in order that there be free education for the children of Rugby and Brownsover. As the school’s reputation burgeoned, however, there was an increasing trend for prosperous families to move to Rugby in order that their children might benefit from this. Changes to the Foundations risked seeing the town’s children further marginalised. This sparked a number of protests, and among the many suggestions to resolve the issue the headmaster, Dr. Temple, proposed a separate Lower School for the boys of Rugby and Brownsover. This school opened in 1878 on what was then Market Field.

The early years saw a struggle for numbers and income, so that there was a constant desire for children of the town to be charged fees. In the early 20th century Rugby School proposed to hand over the school to the county, although a compromise was reached. By the time that Sheldon Robert Hart’s spell as headmaster ended in 1921, the school had taken on a character more like the present day, aided by the industrialisation of Rugby town.

Even into the late 20th century the school still retained a flavour of former years, with the uniform (I still recall being told the sixth form was the first sixth form in Rugby to be allowed non uniform – a suit, shirt, and tie of one’s own choice was not my idea of non uniform!) and having to stand up when a teacher entered the class. The 21st century has seen further building work at the school (the ramshackle wooden huts on the playing field used for Maths and the Sixth Formers are no more!) and expansion caused by the change in admission year from 12 to 11. Throughout its history, however, the school has retained a reputation for academic excellence, ensuring that Lawrence Sheriff’s original legacy remains.

History at the school

Readers of this site may be pleased to know that History has always been part of the curriculum, although in 1879 the scope of the subject was rather limited. The school also ran a Natural History Society, with excursions to historical places close by to the school.

It is impossible to do justice to near 140 years history of a school in one page. Anybody wanting to learn more about the early years, however, could do worse than finding a copy of L.V. Wells and A. Russell’s excellent book Lawrence Sheriff School 1878-1978.