You are here: Home>Subjects>Communication>Telecommunications>"I'm on the Train": Wireless Messages from Trains in 1911-12 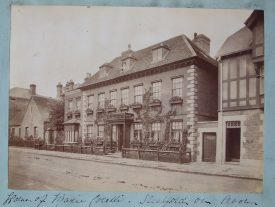 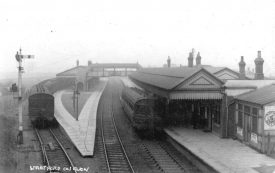 I recently came across this interesting article in the Rugby Advertiser for April 29th 1911.

On Thursday last week, in the presence of a large company, Miss Marie Corelli opened the first “railophone” installation for wireless inductive telephony and signalling to and from moving trains, at the Stratford-on-Avon and Midland Junction railway station at Stratford. The inventor is Mr Hans von Kramer, an Erdington electrical engineer, and by his system of wireless telephony he claims that it is now possible to send and receive messages of every description to and from any train, whatever the speed, or whether it is standing still in a station or along the line. A distance of some 10 1/2 miles, from Stratford-on-Avon to Kineton, has been equipped with the system, which consists of two large frames of electric wires (one for receiving the other for sending messages) which are fixed round a railway coach. Alongside the line, a distance of several feet away, runs a wire – which may be underground or fixed on low posts – connecting up signal-boxes and stations. There is no mechanical contract [contact presumably ed.] between the wire and the train: the connection is “wireless,” the result of electro-magnetic induction emanating from the frame fixed on one of the coaches.

Miss Corelli who was in a marquee outside the station, sent the first message, which was received by the Mayor (Alderman Deer) in the coach. It was as follows: – “I send hearty good wishes for the success of the railophone. I hope the railway companies will quickly adopt Mr von Kramer’s wonderful invention, which means complete safety for passengers and the more perfect control of railway traffic. I am very pleased to inaugurate what I believe will prove to be a great boon to the travelling world.” His Worship made reply, quite distinctly, so Miss Corelli informed the company.

This must have been a very early telephone call from a train in Warwickshire. If you know of an earlier one do let us know.

Miss Corelli was born Mary Mills in London, the illegitimate daughter of Charles Mackay, who subsequently married her mother once he was free to do so. Renamed Marie Corelli, she achieved fame as a writer and eventually moved to Stratford-upon-Avon where she became a flamboyant local character: driving herself around the town in a carriage and boating on the river in a gondola. Her Italian gondolier became a regular drinker at the Black Swan Inn but was dismissed after he attacked someone with a knife during an argument.1 Marie’s gardener took over as gondolier and in 1916, during the First World War, she appealed to a tribunal unsuccessfully for him to be exempted from conscription:  sadly he was killed on active service.

Later on Marie was accused of hoarding sugar, found guilty and fined by the magistrates.2 She is said to have been Queen Victoria’s favourite writer and the inspiration for various characters in novels, including the title role in ‘Angel’ by Elizabeth Taylor, later turned into a film of the same name. Her house – Mason’s Croft – still stands in Church Street and is now used by the Shakespeare Institute who recently (October 22nd 2017) held a Marie Corelli day to celebrate the connection.

Railway telephone system being installed in 1912

Less than a year later it was reported that: ‘A through telephone service is being installed on the L & N-W Railway, and when completed all parts of the system will be brought into direct touch with the large marshalling centres in the South, Midlands, North, North-East, and North-West’.3