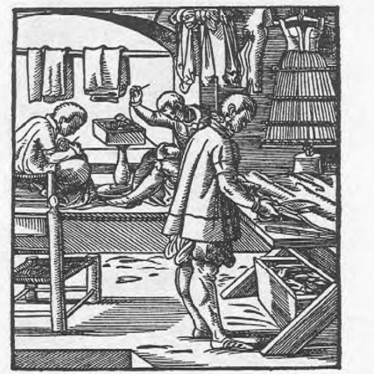 A tailor from Das Ständebuch (The Book of Trades) by Jost Amman.
Released by the British Museum on the W3C open data standard. 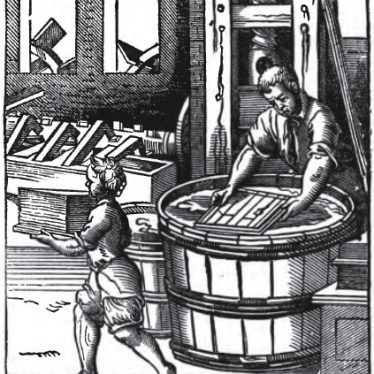 A paper mill of the 16th century. From Chartarius. Der Papyrer. (The Paper Maker)...
Released by the British Museum on the W3C open data standard. 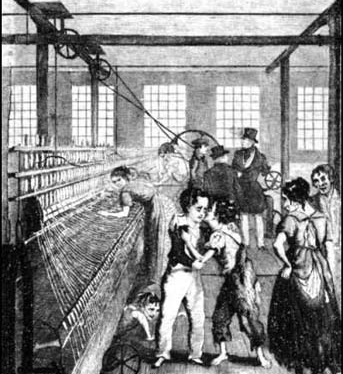 Scavengers and Piecers. Illustration used in The Life and Times of Michael Armstrong by Frances Trollope. (published 1840)
Released by the British Library into the Public Domain.

In the archives of the Shakespeare Birthplace Trust there is a database listing the names of children in the town who were apprenticed to trades in order to keep them from being a burden on the parish. The period it covers, 1606 until 1843, is not just a sad reminder of how many children were put to work as a result of becoming orphans but also shows the influence of the burgeoning Industrial Revolution.

A glover’s apprentice in the 17th century

The database lists poor children who were placed by the parish in the homes of chosen masters to learn a trade. The first child listed is Matthew Daniell whose father had died around 1606 and was set to be a burden on the parish purse until he was found an apprenticeship. Although we don’t know how old he was, the record shows he was from Stratford and was apprenticed in the town to a glover named John Loxely. The premium paid to the parish for his indenture was twenty shillings.

On 1st May 1708 Elizabeth Sale was apprenticed as a servant to John Harper of Alderminster, not a particularly unusual occurrence for those times except that she was just three years old. Her indenture papers stated that she would remain with her master for fourteen years. Before the Cotton Mills Act of 1819 which decreed that no child could be employed under the age of nine, children as young as seven or sometimes younger were put to work. Even so, it is a challenge to imagine how a three year old child carried out a servant’s duties. Elizabeth Sale, fortunately, appears to be an unusual case.

Prior to the Reformation, much of the work of poor relief had been undertaken by the church and the monasteries but when Henry VIII ordered their dissolution, the poor became local government’s problem. By the late 16th century they were re-classified so that relevant legislation could be passed to ease the financial burden on the parish. They were now known as either ‘impotent’, ‘thriftless’ or ‘labouring poor’.

The Elizabethan Poor Law of 1598 stated pauper children were to be sent out to work as apprentices. The later 1601 Poor Law decreed that child apprentices were to be bound into apprenticeships until reaching the age of ‘four and twenty’ for boys and ‘one and twenty for any such woman-child or until the time of her marriage’. For both the 1598 and 1601 Acts, churchwardens or parish overseers were tasked with finding apprenticeships for orphans and children of the poor so that they would have a trade to pursue when they grew up. The luckier children were placed in their own parishes but others were increasingly sent further afield.

The apprentice was deemed to be in that master’s ‘family’ and would remain with him until the apprenticeship was completed, usually seven years. A premium was paid for the child being taken in; the average cost in the 17th century being £2-3 and the child was clothed and fed by the master. One can imagine that the quality of the feeding and clothing varied greatly. Masters were either chosen by parish officers or by a ballot and if the master refused to take an apprentice he was liable to a fine.

The effect of the industrial revolution

Over time the Stratford records show how trade and industry were evolving in the area. Between 1606 and 1750, 26% of masters were in the textile industry and twenty-two percent of apprentices became servants or learned housewifery. After 1750, however, the largest group at 34% remained in the textile industry but servants and housewifery only accounted for three percent. The industrial revolution was clearly making itself felt and although the textile workers remain the largest group in both time frames, the children were now being sent away from home to begin new lives in areas of the industrialised Midlands and some even further afield to Oxford and London.