You are here: Home>Locations>Bretford>The Roads Beautifying Association in Warwickshire

The Roads Beautifying Association in Warwickshire

'Roads of Safety and Pathways of Pleasantness' 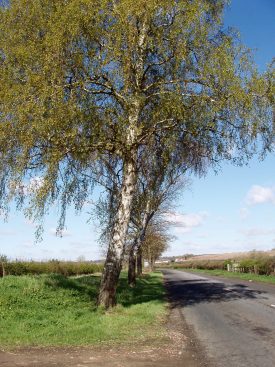 Only two mature trees remain of a former line of Silver Birch trees on the outer curve of a bend on the A428 near Bretford. The rest have gradually died over the last 30 years
Image courtesy of Maureen Harris 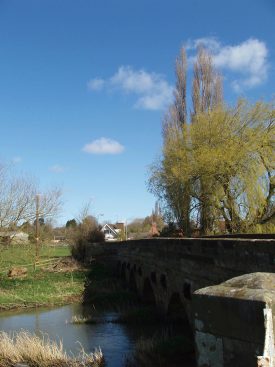 Tall slim Lombardy poplar trees beside the bridge and, behind, at the ‘T’- junction in Bretford may be the result of RBA planting initiatives
Image courtesy of Maureen Harris

We take it for granted that our roads today are relatively wide and straight, well-engineered and surfaced, with good and consistent signage and often attractive roadside planting. It was not always so. Early 20th century roads simply re-used routes created by horse-drawn traffic. They were dusty, rutted and narrow with blind corners and dangerous bends while vehicle brakes, headlights and tyres performed poorly. Newspapers of the time frequently report accidents involving cars and bicycles with the result that in 1929 a total of 6,016 people were killed on the nation’s roads. Even with the explosion of vehicular traffic on our roads today, the number killed in 2013 was 1,713 people.

The safety, layout and appearance of modern roads owes much to two largely forgotten organisations: the Roads Improvement Association or RIA (1886-1952) and the Roads Beautifying Association (1928-ca 1965). The RIA developed from the concerns of the Cyclists Touring Club and from lobbying by the early motoring organisations, the RAC and AA (founded in 1897 and 1905 respectively) on issues such as dangerous bends and controlling dust on roads.

The RIA secretary and later chairman, William Rees-Jeffreys (1871-1954), campaigned and wrote extensively on roads and motoring. In 1903 he was instrumental in persuading Parliament to take evidence on highway matters and the RIA’s constant theme was that Britain needed ‘new roads, safe roads, beautiful roads’.1  The Midland Branch of the RIA reported on problems or improvements to many Warwickshire roads including the Fosse Way in 1928/9, Charlecote Lane Bridge in 1929/30 and Watling Street and Fiveways, Edgbaston in 1931/2. Rees-Jeffreys’ post-war ideas featured the provision of new roads designed for modern traffic and for roadside ‘parks’ where hikers, cyclists and motorists could rest off the carriageway, while children played safely.

Under the 1925 Roads Improvement Act, County Councils were given power to take in marginal highway land and to lay out verges with trees and shrubs, but they had no expertise so poorly-chosen species were planted badly and died through lack of maintenance. In 1928 the Ministry of Transport appointed Dr Wilfred Fox as secretary to the Roads Beautifying Association (RBA), a group of horticultural experts who would provide free advice to councils on the land-take and planting of trunk roads, by-passes and road-widening schemes.

The organisations’ publications, including Roadside Planting (1930), considered the planting of central reservations, verges of irregular width, off-road planting to prevent ribbon development, the use of appropriate species (native trees in the countryside and ornamentals in the town), the screening of industrial areas, using evergreens for wind protection and planting groups of trees to enhance significant views.

The RBA was also instrumental in advising highway authorities on how the planting of trees and shrubs could aid road-safety. For instance, they listed trees which dropped their leaves gradually to prevent the build-up of leaf-litter, advocated the growing of low shrubs to improve visibility on corners and at junctions and the planting of a variety of trees and shrubs to prevent monotony for drivers. The 1949 Triennial Rees-Jeffreys’ Lecturer noted the ‘enormous improvement’ in the nation’s roads and praised the RIA and Dr Wilfred Fox of the RBA ‘who encouraged the building of faster, safer, more attractive roads’.

Although many of the trees and shrubs planted with the encouragement of the RBA must have been removed by modern road-safety improvements, road-widening schemes or natural over-maturity, some may still survive. The RBA book Roadside Planting noted two innovative suggestions which had ‘met with general approval’: the planting of tall, slim Lombardy Poplar tree to mark cross-roads and other road features, and the planting of Silver Birch trees on the outside of a curve in the road ‘to give warning to approaching motorists before they would normally be able to detect the curve at night, by the headlights picking out the white stems’.

Both Lombardy Poplars and the remnants of a former line of birches on the outer curve of the A428 Rugby to Coventry Road at Bretford (OS: SP435765) may be historic features remaining from initiatives encouraged by the Roads Beautifying Association, an organisation that did much to lay the groundwork for the safe and attractive roadside landscaping which we now take for granted.

Do let us know if you spot any other Lombardy poplars or silver birches marking road features in Warwickshire.

‘Roads of Safety and Pathways of Pleasantness’ is a quote taken from an undated post-war speech by W. Rees-Jeffreys

Information is taken from volumes and papers in the British Library, especially P. Bassett, ‘A list of the historical records of the Roads Beautifying Association…’ (1980), and from the William Rees-Jeffreys archive at the London School of Economics, Portugal Street, London.  Other documents exist at The National Archives, Kew.