You are here: Home>Locations>Bretford>Wroth Silver, 2016 Style 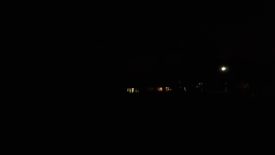 This is the Queen's Head, honestly... but is all I could see!
Image (such as it is) courtesy of Benjamin Earl 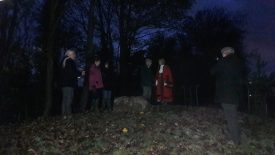 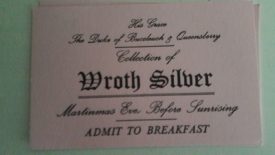 A ticket to a wroth silver breakfast, 2016.
Image courtesy of Benjamin Earl 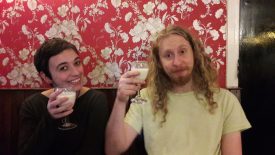 The fabled rum and hot milk being consumed by some cold participants.
Image courtesy of Benjamin Earl 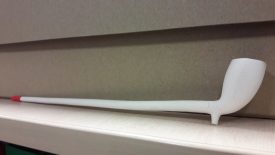 So I decided it would be a good idea to go forth into the dark, and experience the wroth silver ceremony for the first time.

Coming from Stretton on Dunsmore, it’s remiss of me to have left it that long. Indeed, my Dad went four decades ago, so family attendance is not overly frequent, it’s fair to say…

Anyway, if you’re going to do something like this, it’s best to do it fully – all or nothing! Next stage, to rope in a willing victim in my colleague to accompany me…

An enquiry to the wroth silver ceremony website later, and I headed off to the Queen’s Head at Bretford to buy tickets for the breakfast held after the ceremony. I’m easily sold by the idea of rum and hot milk, and a clay pipe.

I’d like to say the morning of the ceremony dawned bright and early but, although it was certainly early, it was rather black outside. I have a picture of the Queen’s Head at that time, but you might not be able to tell much, other than the fact the sky was black…

This is the initial meeting in the pub, before heading to the stone at Knightlow Hill. I can’t help but notice the clash between old and new, the mechanisation that means we drive to the place for an ancient tradition, the fact that this year sees the organisers use a microphone, so that their words can be heard over the roar of the A45. Once a small single carriageway track, the A45 becoming a dual carriageway has seen this side of Stretton become slightly cut off from the main village, but it also accentuates the contrast between tradition and modernity. That being said, the constant noise of the traffic also has a strange effect to my mind, it brings into sharp focus how this tradition ploughs on regardless of changes in life, society… all that jazz.

The ceremony itself is short, the names are called out and good natured gasps are given when certain parishes in the Knightlow Hundred are asked to pay rather more than others. The amounts have been set for rather a long time, so when compared to modern day populations, they seem to be rather arbitrary.

It’s then off to a breakfast, some toasts, and that fabled rum and hot milk! There’s also the smoking of a clay churchwarden pipe. For someone, like me, who doesn’t smoke… this is a challenge. But as they say, it’s the taking part that counts.

So just gone nine o’clock, it’s all over. The attendance was, I must admit, rather more than I expected – the Queen’s Head was full, and getting any pictures at the ceremony itself meant for some mild jostling.

In a modern age, I always find it fascinating how traditions are used to connect the past to the present. We’re more geographically mobile now, apparently, then we ever were – but coming from the area I can feel a small sense of pride, a sense of belonging that comes from maintaining certain traditions. Of course, representation and actuality aren’t always the same; many of these traditions, such as the rum and hot milk, and pipe, aren’t necessarily as old as the ceremony itself. That, ultimately, doesn’t matter however.