You are here: Home>Locations>Astley>Dark Lane, Astley 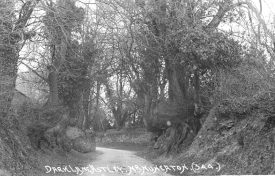 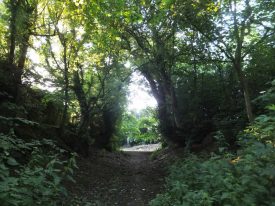 There’s something irresistibly intriguing about old paths and highways that were once well trodden but are now more often than not forgotten or overgrown. Across the years, they’ve attracted the attention of poets (perhaps most famously in Rudyard Kipling’s The Way Through the Woods) as well as writers such as Robert Macfarlane, whose recent publication The Old Ways is a lyrical and contemplative exploration of different paths and routes around the British Isles.

Dark Lane in Astley was possibly once the main route through the village heading towards the church and castle and is so well trodden it is distinctively what is known as a ‘holloway’ – a sunken lane, created through repeated use and associated erosion over many many years. The level of erosion suggests the lane has at least medieval (pre-reformation) origins. The roots of the trees at either side of the path are exposed and the trees arch over the pathway creating a tunnel-like effect that makes the lane, well, rather dark. During the spring the dappled light is perfect for bluebells to grow underneath.

Looking at the old first edition OS map for Astley, you can see that this road led up to the village pound (where stray animals were temporarily kept) on what is now the section of road between Fillongley and Stockingford called Park Lane. Warwickshire County Record Office holds the appropriate order from the Quarter Sessions for stopping up a portion of ‘Shady Lane’ as it is called and the text for the notices regarding the closure which was attached to the door of the parish church as well as being published in the Nuneaton Chronicle (QS 47/312). This explains how the alternative highway was ‘more commodious to the public’ – the old road was practically disused anyway.

The path is now part of the Landmark Trust trail around Astley Castle. If you stop and stare for a moment, you can almost imagine the pilgrims passing through that way on their way up to the church of St Mary…