You are here: Home>Locations>Milverton>Old Trees of Warwickshire. What Stories They Could Tell?

Old Trees of Warwickshire. What Stories They Could Tell? 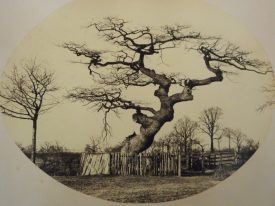 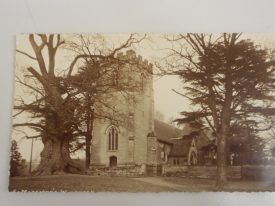 The Ancient Elm, Whitnash. This photograph was taken around the turn of the 20 th century. When the tree was cut down around 60 years later it was reputed to be over 1,000 years old.
Warwickshire County Record Office reference PH 352/200/13

While looking through some documents at the County Record Office recently I came across a somewhat faded photograph of a rather gnarled ancient oak tree. The handwritten caption beneath it said that it was the Watch Oak at Milverton and that it was from here that Cromwell watched his troops bombard Warwick Castle, which is presumably how it got its name.

What could it have seen?

My first thought was “can you actually see the castle for Milverton?!” Then I began to wonder what other things it “watched”. Assuming it was fully mature during the civil war and that it stood overlooking the road to Kenilworth, it would have watched Queen Elizabeth I making her way to see Robert Dudley at Kenilworth Castle. But was it old enough to have watched Piers Gaveston being led to his doom on Blacklow Hill in 1312? Did it watch as the centre of Warwick was consumed by the great fire of 1694? In its old age did it watch as the railway made its way from Coventry to Leamington Spa? While historically Warwickshire has always been known as a “Leafy” county, over the years many fine trees have been lost. Mother Nature has taken her fair share, including the Watch Oak that was blown down in 1888. Others have succumbed to old age, such as the huge Elm that used to stand on the green in front of Saint Margaret’s church at Whitnash. This was a tree that was reputed to be over a thousand years old when it was cut down in 1959. Some of the biggest losses have been due to creeping urbanisation, road widening etc. While most modern developers try, wherever possible, to save mature trees, this has not always been the case. Plus of course these efforts do not protect saplings, so over the years many thousands must have been lost.

However, one of the biggest and most dramatic losses over the last 40 years has been due to Dutch Elm disease. This virtually wiped out every English Elm tree, completely changing the landscape. This was a species so prolific in the county it was often known as the Warwickshire Weed. However, despite all these losses, Warwickshire is still a relatively “Leafy” county with many beautiful old trees gracing the landscape. So next time you are out enjoying the countryside, or even in town and you see a huge oak tree with a massive trunk, or a large horse chestnut loaded with conkers, or maybe an old yew tree in your local churchyard, just think for a minute of all the things it may have witnessed in its long life. Alternatively when you see or plant a sapling, imagine all the wonders it might see during its lifetime.