You are here: Home>Locations>Nuneaton>F.H. Biddle of Nuneaton Drawing Office Recollections 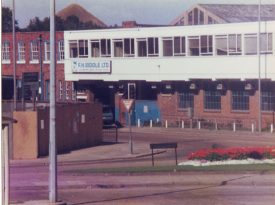 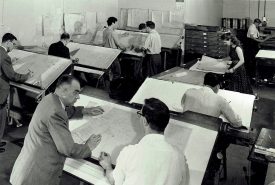 I was a trainee draughtsman at British Trane from July 1951 to Dec 1955. Frank Trotman was Chief Draughtman, (he was also captain of St Nicolas camponologists). After Frank died Charlie Davenport became Chief Draughtsman and Harry Brown, Ted Taylor & Pete Fowler were also in the D/O. Mr Joy was gatekeeper and Frank Bentley was MD.

I believe that British Trane Co. Ltd was the manufacturing side of the company, and F H Biddle was the sales and marketing side, operating from their head office in Clerkenwell, London. I presume that Biddles in Nuneaton are still manufacturing heating, ventilating and air conditioning equipment.

When I was an employee the offices and factory were in Newton Road, where ASDA is now. The photo of the building shows an extension on the first floor over the original entrance (the white area), built after I left in 1955. The original drawing office was in the brick façade to the left, on the first floor. Apart from the prominent chimney I recall that the works housed a small pumping station which extracted water from an underground source, and supplemented the town supply.

Don described life in the Biddle drawing office in the mid 1950s. I have attached a photograph taken inside that drawing office, I would think probably in the late 1950s.

In the foreground is Charlie Davenport, the man in the jacket, who is seen leaning on the drawing board of Albert Jones. The two guys talking in the background, are on the left, Harry Brown who later became head of the drawing office and Bill Chetwyn.

Albert and Harry spent all their working lives at Biddle whilst Bill spent a very big part of his there too. Perhaps Don might be able recognise the remaining people in the photo.

You may also be interested in these photos of Biddles.