You are here: Home>Locations>Nuneaton>Warwickshire at War 1914-1918: Mars and Matrimony 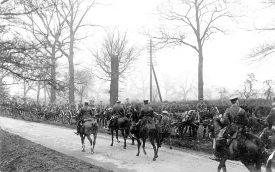 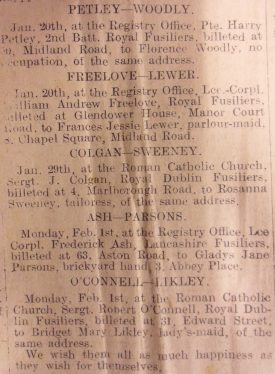 At the beginning of 1915, various regiments were being moved to Warwickshire and billeted locally. They were to form the 29th Division, which was inspected by King George V on 12th March 1915 along the Dunchurch Avenue near Stretton on Dunsmore. By 15th March 1915, the 29th Division set off to Avonmouth and on to Gallipoli.

In the Nuneaton Chronicle, the movements of the regiments into the Borough, their activities whilst they were billeted in Warwickshire and their departure in March 1915 is actively reported during the first few months of 1915.

Then on 15th January 1915, Page 4, Column 5, there is a vibrant article which starts with “Soldiers, soldiers, everywhere! Such is the aspect of the Borough at the present moment”. The article details which regiments have “invaded, our homes, commandeered our shops and institutes raided” including the Royal Fusiliers, Dublin Fusiliers and Lancashire Fusiliers. “It seems our welcome visitors are part of a Fusilier Brigade to be formed up in the Midlands and shortly to go to the front.” The article continues with a theme that “we have a duty towards our guests, as they have a duty towards us” and “we must therefore extend to them our courtesy, both officers and men, and accommodate them in the best way in our power”.

“Mars and Matrimony. Warwickshire Wives. Fusiliers Find Five” is the title of an article in the Nuneaton Chronicle on 5th February 1915, Page 7, Column 3. The article details the marriages of Warwickshire women to soldiers from the visiting regiments. “Cupid has been busy in our midst since the arrival of the “Boys in khaki; boys in red,” and the arrow has found its mark in many a heart”. The article has a jovial but frank tone, “already no less than five of the fine fellows now billeted in the town have found their fate, and assumed the responsibilities of matrimony prior to their departure for the field of Mars – the grim god of battles”. It is interesting to read that “singularly enough, four of the five are non-commissioned officers – two lance-corporals and two sergeants”.

Weddings of Warwickshire women to fusiliers

As the 29th Division started to make their way to Gallipoli on 15th March 1915, the Nuneaton Chronicle reports on the “Last of the Fusiliers” in its publication on 19th March 1915. “Amidst everry [sic] manifestation of deep regret on the part of the townspeople, the Lancashire Fusiliers made their departure in the small hours of Tuesday morning, thus leaving the Borough entirely denuded of soldiers in the bulk”. The article details the exact departure of the Fusiliers and describes the affection felt for the departing men as “there were many affecting scenes, for the soldiers made sad havoc with the hearts of the gentler sex, and have generally endeared themselves to the whole community”.