You are here: Home>Locations>Nuneaton>What's on at the ABC, Nuneaton?

What's on at the ABC, Nuneaton? 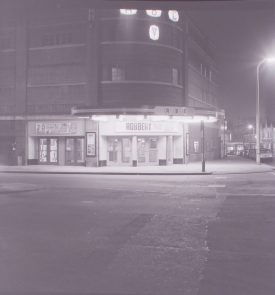 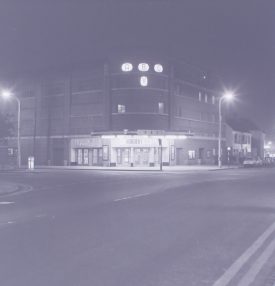 Here’s a nicely evocative couple of shots from the Reg Bull collection of photographs. These photos are nicely catalogued with dates, but here there’s a rather blatant clue as to the date also, as it appears the film Robbery was showing. A quick Google (yes, this is yet another film I have not seen – I really ought to start watching more films for doing articles like this!) tells me this is a British film, loosely based on the Great Train Robbery.

Is it any good?

It’s also worth noting that the director Peter Yates got the job of directing Steve McQueen’s Bullitt in part on the back of the work he did with that film.

The website ‘Cinema Treasures’ tells me that the cinema opened as the Ritz in 1937, was renamed as the ABC in 1961, but reverted to the name Ritz on being taken on by an independent operator in 1977. It closed as a cinema in 1984 but, like so many buildings of its ilk, became a bingo hall until final closure in 2007. The building is significant enough to see the interior listed by English Heritage. Among the reasons given for its listing is the fact that “the extensive and high-quality interior scheme remains almost entirely intact, with impressive Art Deco, Neo-Egyptian and Chinoiserie-inspired decoration carried through the foyer, staircases, auditorium, stage, ante-proscenium and proscenium.”

It sounds just the type of building that needs showing off to its full grandeur, and it seems Ken Loach agrees.

Do you have any memories of visiting the cinema? Do please tell us more!