You are here: Home>Locations>Bilton>The Crow Pie Wake at Bilton in the 1900s

The Crow Pie Wake at Bilton in the 1900s 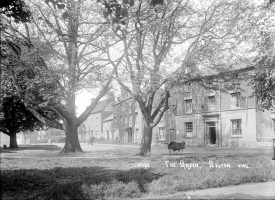 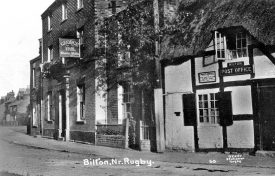 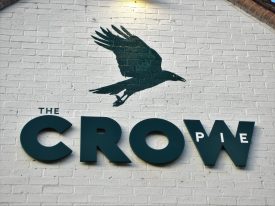 Originally a wake was a commemoration for the founding of a church, an all-night vigil. However the celebrations spread to Saturday and then Monday and the term came to mean a fair or other local celebration. In some places factories closed for a week (for maintenance) and their employees had a ‘Wakes week’ holiday.

The Rugby Advertiser for May 13th 1911 reported on the Crow Pie Wake at Bilton as follows:

This festival, which is always held on the first Sunday after May 5th, was celebrated on Sunday and Monday last. The weather was all that could be desired, and there was a large influx of relatives and friends. The Village Band played during the afternoon, and the Rugby Town Band paid their usual visit in the evening; and by special request, in consequence of the serious illness of Mrs Whiteman, of the Post Office, took their stand at the top of the village, and played a selection of music. There was a record attendance, the main road being at times during the evening almost impassable. On Monday the weather was again fine, and in the evening another large crowd put in an appearance, the chief attraction being Thurston’s varied shows, which were located in a field belonging to Mr W Beasley, and must have done a good trade. Only a few stalls were allowed on the green, and did but little business. The wake, on the whole, was considered the largest ever held. The crowd was very orderly.

An actual crow pie to eat

This annual event for 1913 fell on Whit-week, and the “oldest inhabitants” [sic] says it is more than half a century since a similar coincidence occurred. The weather on Sunday evening being fine and warm, there was a large influx of visitors, as usual. The Bilton Brass Band, under the direction of Mr Finch, played selections of music on the Green in a very creditable way, and their efforts were fully appreciated. Monday was utilised by the Foresters for their anniversary.

The paper went on to say how the traditional “Crow Pie,” after which the festival was named, was seen as a myth, but this time the hosts decided to make such a pie. This was enormous, and contained 30 rooks, 12 lbs of beef steak, and 24 eggs – apparently those who tasted it found it to be excellent.

Although the weather meant the anticipated fun fair was unable to set up on the Green, “many itinerants in a more modest line of business were in attendance, the Green being quite crowded with stalls, swing-boats, &c.” The rain on the Monday also affected the attendance that day, “although the dance promoted by the Foresters’ Anniversary Committee at the Church House was well attended, about 130 being present,” whilst during the evening, the committee provided refreshments. Meanwhile, the paper reported how on the Tuesday the traditional “beef-eating” took place at the Black Horse Inn.

The Crow Pie pub in Bilton

I’ve been unable to discover the origin of the name for this wake: there’s a pub called the ‘Crow Pie’ in Bilton that looks fairly modern and doesn’t appear in any of the pre-1940 trade directories at Warwickshire County Record Office so I don’t know when it started. The pub has changed hands recently and the sign (which used to feature a crow pie) has been replaced. Does anyone know the origin of the name for the wake? Or when the ‘Crow Pie’ pub appeared? Do you have a photo of the sign before the recent makeover? We’d love to hear from you if so.