You are here: Home>Locations>Leamington Spa>Festivals of Light in Leamington and Beyond

Festivals of Light in Leamington and Beyond

"'Tis better to light a candle" 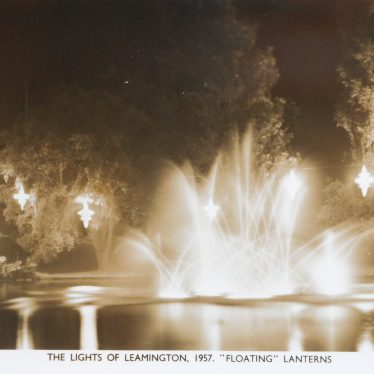 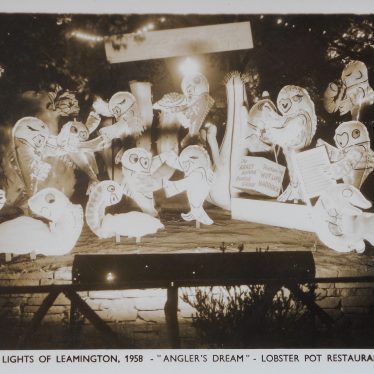 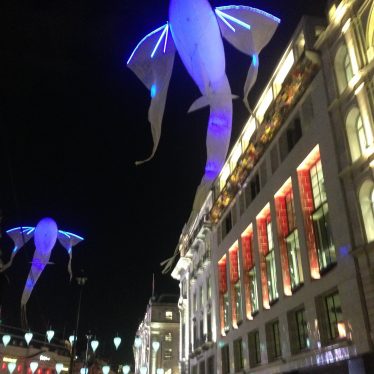 Between 1951 and 1961, Leamington’s Jephson Gardens played host to a spectacle of dazzling proportions: the Lights of Leamington illumination shows. They featured fireworks, dancing, live music, and, of course, illuminated displays that ranged from the sublime to the ridiculous! These included (but were by no means limited to): a skyline of New York reflected in the lake; miniature scenes of mushroom fairy cottages; birds glowing in their cages; a floating pagoda; a juggling giraffe; and a yearly illuminated floral clock.

Light is a powerful instrument in transforming spaces. Historians such as Craig Koslofsky have talked about the ways in which street lighting has altered people’s perception of the night-time, allowing the wider public to lay claim to, or ‘colonise’, spaces which had previously been unsafe or the domain of more marginalised groups.1

I wonder how attitudes towards a dark park at night-time could be changed by such a defiant display of public light?

Now, I confess, I am not old enough to have any memories of the Leamington events, but I do have friends who visited the recent ‘Lumiere’ light festival in London. From their stories I gather it was an intense experience, an opportunity for artists and creative folk to play with light in innovative and powerful ways. There’s something special about seeing a familiar place transformed by these installations; places you knew well become full of new discoveries. I wish I’d had the opportunity to see the show in London, just as I wish I could have seen Jephson Gardens lit up as it is in these postcards.

The kind of installations seen in London this year were very different from those in the postcards of Leamington’s ’50s festivals. But I can imagine they sparked the same sense of exploration, wonder and spectacle. And both were opportunities to fill a scene with creative ideas, to watch it transform with the setting sun and, as the lights fade, to see it returned to its familiar self.

Do you have memories of the Lights of Leamington? Or did you see the show in London this year? I’d love to hear about the experience, and what you think these light festivals bring to our sense of place and cultural heritage.