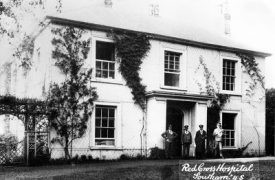 The Grange, Southam, as a hospital.
Image courtesy of Southam Heritage Collection

April 7th, is the 100th Anniversary of the official opening of the Southam WW1 Red Cross Hospital in 1917. Open for just two years, the hospital treated approximately 1,000 wounded soldiers. The hospital was funded by many generous local donations and staffed by local women from Southam and the surrounding villages who volunteered their services.

There was Dr Lattey who trained the first nurses in 1914 and later with Dr Ormorod; they trained more nurses to manage the hospital from 1917, when it started to take in the wounded soldiers.

We know there were at least 50 nurses during the time it was open, because we have many photographs of large and changing groups of nurses. Some even married their patients during or after the war. Each nurse has a page on our web site for her story and many have descendants still living in and around Southam.

The research work is continuing since some of the volunteers still remain unknown and Southam Heritage Collection would be delighted to hear from any people who may have additional information or photos stored away in their family albums or archives.